Another Conservative MP has said he will not be standing at the next general election.

Chris Skidmore, the MP for Kingswood, said in a statement “there has been no greater honour in my life” than to represent the constituency, in southwest England.

“Parliamentary boundary changes will result in the Kingswood constituency ceasing to exist.

“With no alternative seat, I have decided that I do not wish to fight at another constituency elsewhere in the region or country, especially with a very young family who deserve to see more of their father in their lives”.

Mr Skidmore, 41, posted the statement under a tweet saying: “Some thoughts on the future…”.

He now wants to focus his career on the UK’s commitment to net zero carbon emissions by 2050 – for which he was responsible for legislating and signing into law, in his role as cabinet member for energy and clean growth.

“It is clear to me that net zero and tackling climate change will be the greatest challenge, yet also the greatest opportunity, of our generation,” he said.

“It is this opportunity – to demonstrate how we must protect our environment and climate for the future, at the same time as delivering a new clean and sustainable energy system that shifts us all away from fossil fuels – that I now wish to devote my attention to.

“Rather than step aside, I hope that in the future I can step up to continue to play my own small part in helping to deliver on the energy transition that the world needs.”

Mr Skidmore thanked his constituents for putting their “faith and trust in me to serve as their local MP”.

He previously served in the Department of Health and Social Care and the Cabinet Office.

Mr Skidmore becomes the ninth Conservative MP to announce their departure plans amid mounting concerns over the party’s performance in opinion polls.

His announcement comes after levelling-up minister and rising star, Dehenna Davison, 29, said she would not stand again in the former Labour stronghold of Bishop Auckland.

Sir Gary Streeter, 67, also announced he was stepping down at the next election – bidding farewell to the South West Devon constituency he has comfortably held since its conception in 1997.

Other MPs to join the apparent exodus include William Wragg, 34, and Chloe Smith, 40 – as the relatively young ages of many planning to quit sparks alarm within the party.

An Ipsos poll conducted earlier this week revealed how the Conservative’s popularity had plunged to 26%, its lowest score for 15 years.

The party has struggled to recover public confidence after Liz Truss and Kwasi Kwarteng’s mini budget unleashed “utterly catastrophic” consequences for the economy, sending the pound into freefall. 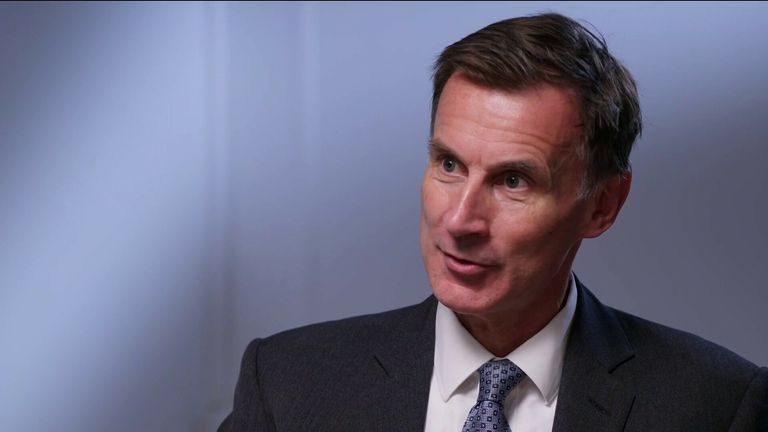 Jeremy Hunt has said he regrets the turbulence caused by Liz Truss’s mini-budget, but he does not believe it inflicted long-term economic damage

But he refused to accept the mini-budget inflicted £30bn worth of damage.

“I don’t believe there was a long-term impact because the measures they introduced were reversed so quickly,” Mr Hunt told Sky News’ Beth Rigby Interviews programme.

Prime Minister Rishi Sunak also refused to apologise six times over the financial pain his predecessor had inflicted on millions of people across the nation.