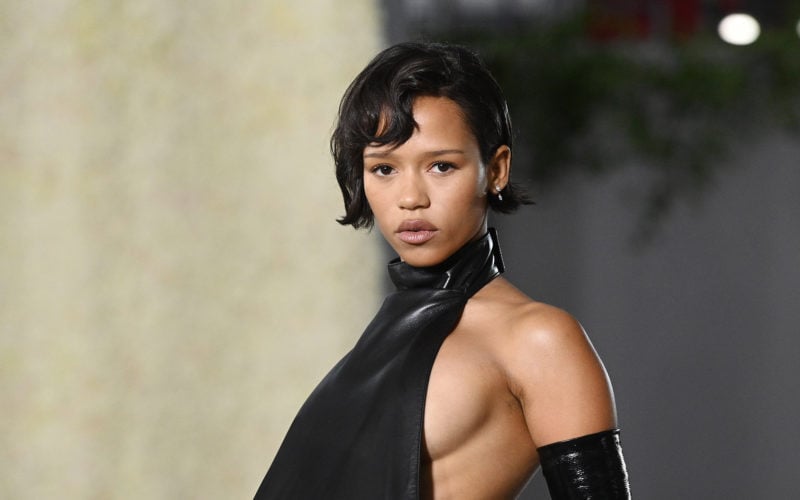 The ‘Bones and All’ star is a beauty icon in the making — just look to her shape-shifting bob for proof.

It’s not every day we get to witness a beauty icon budding before our very eyes, yet here is Taylor Russell — and her always beguiling hair.

As the leading lady of Bones and All, Luca Guadagnino’s newest film, Russell has spent recent months promoting the project on global red carpets alongside co-star Timothée Chalamet, all the while establishing her position as a style star to watch. (The Canadian actor even landed an ambassadorship role with Spanish fashion house Loewe.)

But aside from her fashionably chameleonic ways, Russell’s ability to transform her blunt brunette bob makes a major case for Russell as the next big thing in the beauty sphere as well. A true Russell hairdo is often short, polished and chic — a refined alternative to her Bones and All character Maren, who wears a more severe blunt fringe.

At the Los Angeles premiere of Bones and All last week, Russell showed us precisely why she is a force to be reckoned with in the hair game with an intricate bow-like style carried out by celebrity hairstylist Peter Lux (below).

In an Instagram caption, Lux details the spur-of-the-moment creation of this complex coiffure. “This hair was so fun to create and kinda just happened within 30 minutes, a can of super extra strong AF hold hairspray and a bundle of hair extensions the day before the event.” explains the stylist.

In the comments of the same post, find Don’t Worry Darling actress Florence Pugh swooning like the rest of us. “This is absolutely breathtaking… wow. Wow. Wow,” she writes.

Throwing any short-hair-is-boring stigma out the window, this Canadian star proves no style is off limits for her and her bob. In a case study on how to flawlessly execute a bob in more ways than one, observe Russell, below, with her locks in a classic crop.

At the Venice Premiere of Bones and All back in September, Russell looked every bit the part of a breakout star who had indeed arrived. For this cropped cut, the main objective was “classic and chic” — celebrity hairstylist Lacy Redway shares in an Instagram caption. “Can you tell I was playing with some vintage shapes at the festival?” she writes in another post of Russell on the arm of Chalamet, photographed at just the right angle to capture the unique part that forms look.

After taking home the award for Best New Young Actress at the Venice Film Festival, it seemed the 28-year-old rising star not only channelled the talent of vintage actress Josephine Baker, but replicated the beauty of the American-French entertainer with this slick face-framing Eton crop hairstyle (above).

Beneath the wide brim of a Schiaparelli boater hat for an appearance in early October, Russell’s bob was sleek and slicked. A slight tilt of the brim gives a glimpse of hair tucked behind the ear, while a blunt cut styled by Lux is on display from behind.

At the second annual Academy Museum Gala in Los Angeles, Russell swapped her usual sleek styles for a slightly more tousled approach. Styled by Adir Abergel, the Loewe ambassador was the canvas for 1960s-esque flipped out ends and a side part that folded over into a half-bang just above the brow.

Crowned in Cartier, Russell shows she can do updos, too. Stylist Sonny Molina smoothed her bob into one neat and elegant style to allow the diamond headpiece to shine. In this departure from Russell’s typical hair choices, we learn there is really nothing she can’t do (or ’do, as it were).

The mastermind behind this glossy hairdo? Evanie Frausto, whose hairstyling work you may recognize from ultra-long locks or avant-garde imagery of Bella Hadid — but for this new beauty icon, it’s all about serving shapes. It’s safe to say Russell is partial to one side of her hair tucked behind her ear and the other left out, and here she strikes again with this signature setting.

With her transformative beauty looks, we can’t wait to see what how the Canadian rising star wears her hair next.