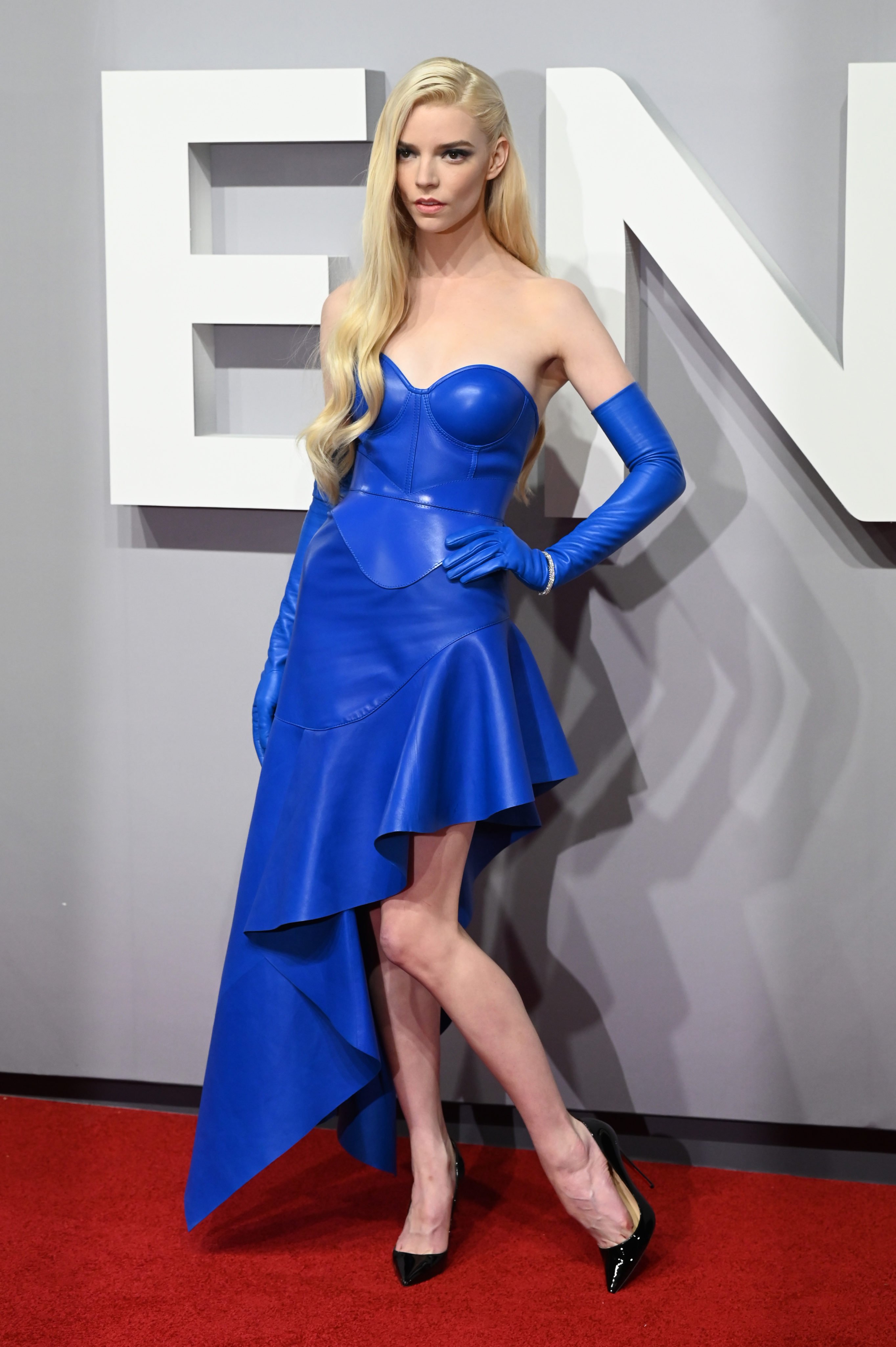 A production that involves Anya Taylor-Joy usually guarantees a few things: an unsettling plot, a misunderstood main character, and a series of striking press tour looks. To promote her newest film, The Menu, the actor seems to be taking that last one very seriously.

As such, promotional events for The Menu find Anya Taylor-Joy stylishly serving up (pun intended) a series of different aesthetics. From sci-fi-inspired to vintage to gothic glam, the actor’s transformative looks over the past week feels more like a series of costumes than going-out garb. It seems every day is the Met Gala when you’re Anya Taylor-Joy on a press tour, and we, the people, aren’t complaining.

The fashion festivities kicked off on November 9 in London, when the actor stepped out in a trippy, vintage black and white houndstooth dress and matching jacket by Alaïa. Later that same day, she switched up her style in a futuristic bright blue asymmetrical gown from Alexander McQueen’s spring 2023 collection. But this was only the beginning.

The following day, on November 10, Taylor-Joy sported a deliciously unexpected aesthetic to accept an award at the Harper’s Bazaar UK Women of the Year Awards. Wearing a lacy all-white look from Dior’s spring 2023 collection, she paired the tie-up top and hoop skirt getup with trailing pigtails and heavy eyeliner. The Little-Bo-Peep-meets-vampire look was lovingly dubbed “unusual” and “weird.” But above all, it felt true to her — or rather, her characters.

After all, though she’s a sought-after Hollywood talent, the world doesn’t really know much about Anya Taylor-Joy. Apart from her headline-making red carpet appearances, the star is notoriously tight-lipped about her personal life, even having a “secret” wedding with partner Malcolm McRae over the summer.

The only real snippet the public gets into her everyday life is via street style paparazzi shots, which have become their own aesthetic genre among her fans. Ultimately, this elusiveness only adds to her mysteriously ethereal image, and arguably allows her to embody her on-screen persona on the red carpet. We don’t really know who Anya Taylor-Joy is, so on the red carpet, she gets to be anyone she wants to be.

From her terrifying breakout role in 2015’s The Witch and her magnetic portrayal of the competitive Beth Harmon in 2020’s The Queen’s Gambit to her take on a sly witch in 2022’s The Northman, Taylor-Joy’s characters are often odd, unfriendly and hard to read. As it turns out, she likes them that way. “What has attracted me to them is they’re outsiders,” she recently told Good Morning America of her on-screen portrayals.

Similarly, The Menu’s Margot is described as an “enigma.” She’s coolly disinterested in the hype surrounding the over-the-top restaurant, and she’s not afraid to be herself in an intimidating, elitist space. So, to promote the film, we should expect nothing less than a parade of unapologetically peculiar pieces worn by Anya Taylor-Joy. And that’s just what we’re getting.

On November 10, the actor delivered the unexpected in an edgy ’70s Harris Reed bell bottoms set. To maintain the keep-’em-guessing energy, she opted for a dark, moody look to the New York premiere of the film on November 14, where she wore a lacy Dior mini dress with cut-out opera gloves. That same day, she slipped into a vampy-yet-romantic getup, wearing a Magda Butrym red mini dress with matching trench coat, tights and pumps.

While she may not be outspoken, Anya Taylor-Joy makes statement after statement in her red-carpet looks. Since the star began working with FASHION’s November Cover Star Law Roach a few years ago, her evening ensembles have been fun, exciting and always unexpected. Now working with Ryan Hastings — who has styled other budding It girls like Mia Goth and Taylor Russell — Anya Taylor-Joy is yet again letting her sartorial prowess do the talking with nothing less than a fashion feast.

The key to her style? Different, but always dramatic. Take her looks on November 15. The star wore both a cutesy pink Nensi Dojaka minidress and a revealing PatBo pearl-beaded slip, emitting utmost ease in both. Perhaps her most contrasting costumes to date were on November 16. Still in New York, the actor stepped out in a pink tweed two-piece set à la Blair Waldorf. Later that day, she looked transformed in a Schiaparelli sculptural ensemble, complete with a boned bustier, conical bra cups and platform wedges with gold-plated toes.

With each new campy outfit, it’s as if Anya Taylor-Joy is playing a different character. Which one is the real her? That, we may never know. But in the meantime, we’ll continue to eat up all the looks The Menu is serving.