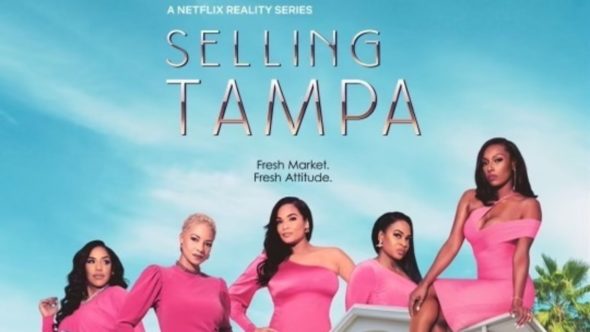 Selling Tampa is not returning for a second season. Netflix has cancelled the reality series, which debuted in December 2021, after just one season.

“When they show us [black women] in a different light — when we’re bickering, fighting and name-calling — they get a Season 2 and Season 3, but that’s not what we were displaying.

I feel like we weren’t given a second chance, possibly because of what we represented as minority women.

[Selling franchise creator Adam DiVello] specifically said [the decision] was related to numbers but never gave any additional information. I don’t know if he was talking about rating numbers or budget numbers. He just said numbers.

When it comes to a minority show of all minority cast members, we’re going to naturally have lower numbers because we are a minority in numbers [of the population] in general.”

An insider revealed more about the Netflix cancellation:

“There aren’t any plans right now for more ‘Selling Tampa,’ but luckily the first season is still on Netflix for fans to rewatch or discover.

We know that [‘Selling Tampa’] was No. 1 in multiple countries, and it did fairly well. Obviously, it’s not going to be a ‘Selling Sunset’ Season 5. … It’s just weird. All of a sudden this all-black cast doesn’t even get a chance for a Season 2.”

What do you think? Have you seen this show? Did you want a second season of Selling Tampa on Netflix?

Palestinian militants ‘ready to die’ as prospect of all-out war increases
Anna Kendrick Admits The Hardest Things She Was Ever Asked To Do For Press (And How Terrified Everyone Is Of David Letterman)
Shapps demands decade-long steel jobs guarantee as part of £600m aid plan
Nikki Bella Addresses Rumor She & Artem Aren’t Legally Married
Reading Resolution: Shopping My Shelves in 2023