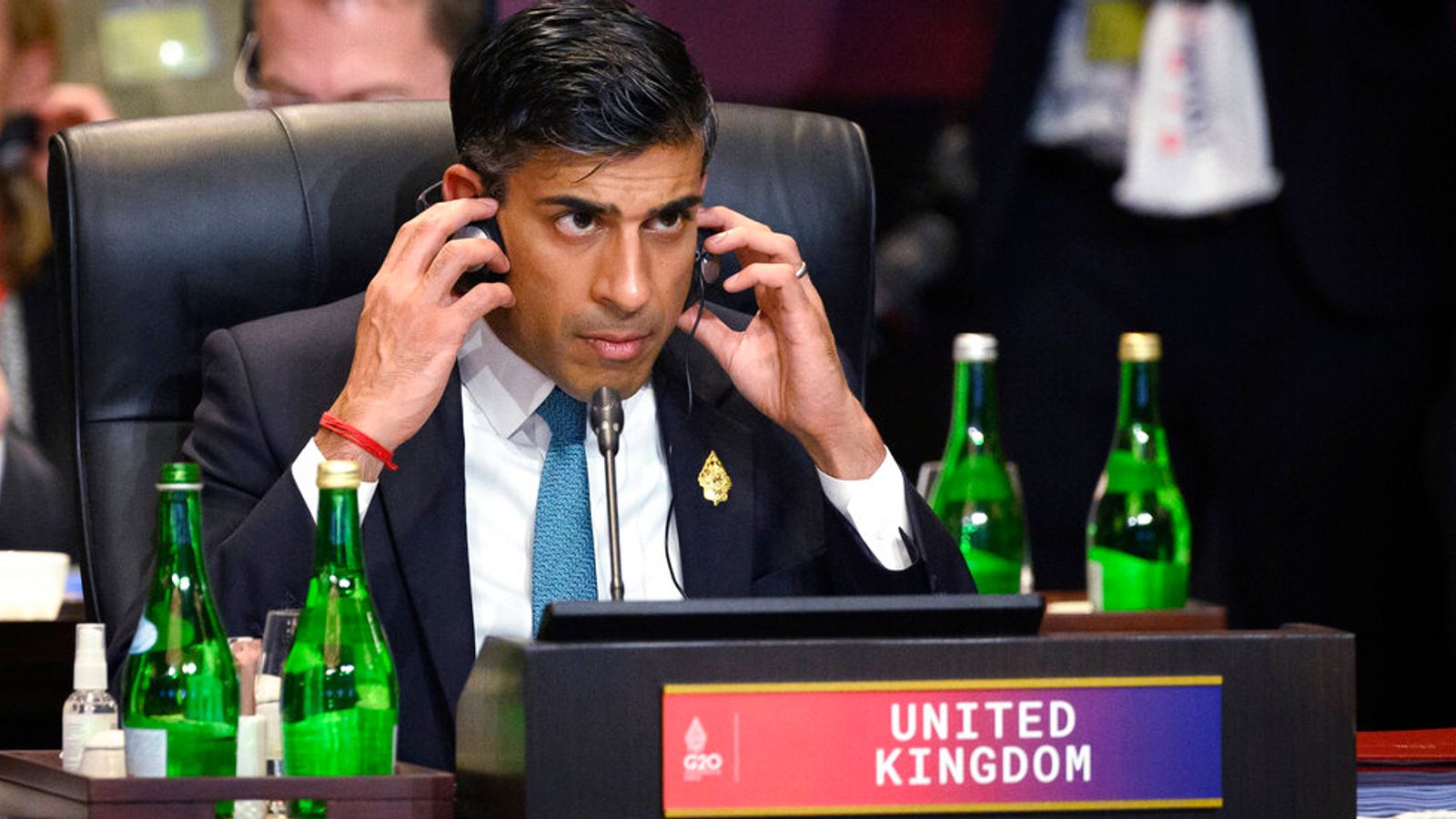 Rishi Sunak has said Russia must “get out of Ukraine and end this barbaric war” as he confronted Vladimir Putin’s officials at the G20 summit.

The prime minister made the comments in the first session on Tuesday as he criticised the absence of the Russian president at the talks on the Indonesian island of Bali.

“It is notable that Putin didn’t feel able to join us here,” he said. “Maybe if he had, we could get on with sorting things out.

“Because the single biggest difference that anyone could make is for Russia to get out of Ukraine and end this barbaric war.

“The UK rejects this aggression. We will back Ukraine for as long as it takes.”

Mr Putin chose not to attend the talks, with the Kremlin blaming scheduling conflicts, but observers say officials are seeking to shield him from condemnation by world leaders.

Mr Sunak also rebuked Russia by saying “countries should not invade their neighbours”.

“Surely these are things on which we can all agree.”

The prime minister sat down with leaders of the world’s 19 biggest economies in Bali – the first meeting in the group’s 15-year history to be held in the shadow of a major European war instigated by one of its members.

‘Chorus of opposition to Putin’

Mr Sunak will use the summit to push the world’s most powerful economies to do more to reduce their dependence on Russian exports, while supporting others to do the same.

He will also reiterate the UK’s financial support for Ukraine, saying he committed £4.1bn in aid when he was chancellor.

This included £2.3bn in military aid, while Mr Sunak will promise to match this level of spending next year.

Before the meeting, he said: “Putin and his proxies will never have a legitimate seat at the table until they end their illegal war in Ukraine.”

He continued: “At the G20, the Putin regime – which has stifled domestic dissent and fabricated a veneer of validity only through violence – will hear the chorus of global opposition to its actions.”

Russia invaded Ukraine almost nine months ago, leaving the rest of the world struggling to deal with the fallout, which has included rising food and energy prices.

Many countries have stood firm, supporting Ukraine with weapons and aid, while imposing various sanctions on Russia.

Mr Putin sent Sergei Lavrov, the foreign minister, to the talks in his place.

He was taken to hospital on his arrival at the talks with a heart condition, the Indonesian authorities said – though the Russian foreign ministry dismissed the claims as “fake news”.

Last week, the UK introduced legislation to stop countries using its maritime services to transport Russian oil unless it is purchased below a price cap – which Number 10 described as a “hugely influential measure, given the UK provides around 60% of global maritime insurance”.

“You Are Love” delivers on the sheer physical rush of dance music, as HAMX holds nothing back
Doom Patrol Season 4 Trailer Teases “Something Big” and “Dangerous”
‘I believe in Brexit’: Sunak tries to quash rumours of closer alignment with EU
Biden sends federal aid to help clean up after massive ‘lake effect’ snowstorm
Trump loses bid to avoid handing over tax returns