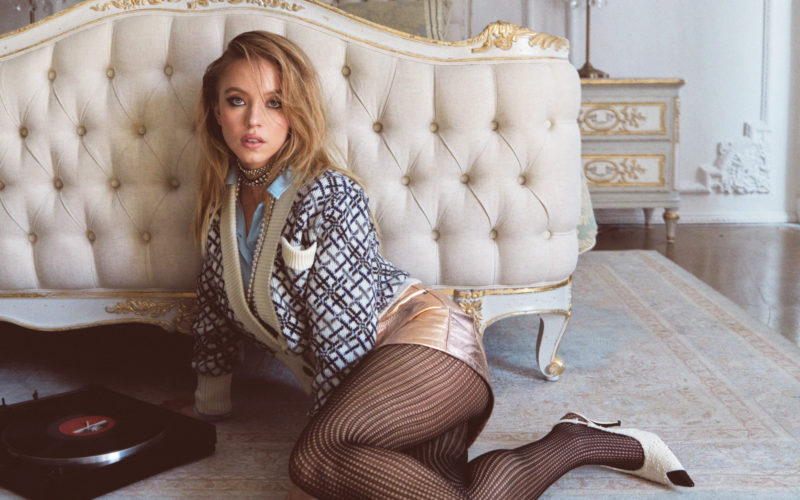 With her captivating performances in Euphoria, Sharp Objects and The White Lotus, the 24-year-old has proven that she’s exactly where she belongs.

When Sydney Sweeney pops up on my laptop screen with no publicist chaperone tuning in off-camera, I’m shocked. Calling from her L.A. home, the star, who has shot to fame through a string of award-winning series, appears at her dining table looking approachably glam. An oversized sweatshirt balances her blown-out locks and a trace of smoky eyeliner, remnants of her day spent on a “very fun” test shoot for a top-secret project.

In stark contrast to the sarcastic intensity of Olivia Mossbacher, her character in this year’s juicy HBO hit The White Lotus, Sydney Sweeney is upbeat, easygoing, quick to laugh and very forthcoming. And over the course of our chat, I learn to expect the unexpected. For instance, when asked about her time in Toronto a few years ago to play ill-fated child bride Eden Spencer in season two of The Handmaid’s Tale, she immediately shares her photos from numerous visits to Casa Loma. “I love architecture and old buildings,” she says. “Every day I had off, I’d walk around by myself while listening to the guided audio tour. I’m not the best at going out to bars and stuff. I feel really bad for my friends; they’ve all given up on even inviting me.” Perhaps not your typical response from a 24-year-old rising star, but everything about Sydney Sweeney goes against type.

I hope that the different characters I play speak to people on a deeper level, whether it’s through one decision or one moment in their onscreen lives.

And it has since the Washington native got her start in the industry. She was 12 when she successfully pitched her parents a five-year plan via PowerPoint and later nailed her first audition. “My parents are very intellectual people, so I thought, ‘How can I communicate on a level that will make them take me seriously?’” she says. Noting that her journey as an adolescent was “very hard and sometimes very depressing,” Sweeney was intent on making her tweenage self proud — and she has done just that. She clearly has a knack for portraying young women wrangling with heavy-hitting issues such as mental illness, sexual assault, abortion and privilege.

Cassie Howard, Sydney Sweeney’s character in the award-winning HBO drama Euphoria, which follows high-school students dealing with drugs, sex and violence, is a prime example. “It could have been a one-note character: She’s just the nice slut,” points out Sweeney. “Cassie spoke to me on a different level, so I was able to find a depth to her. I hope that the different characters I play speak to people on a deeper level, whether it’s through one decision or one moment in their onscreen lives.”

To deliver a final performance that resonates, Sydney Sweeney creates an interactive character book for each role. She fills it with art, images, stickers and more to help her form the visual memories of a character from birth. The exercise also aims to have a swinging-door effect. “A mentor once told me that the healthiest thing to do is separate myself as much as possible from the characters I play, since I do, weirdly enough, enjoy going to the darker places,” she says. “And then I’m able to snap right out of it because I can separate myself from my characters completely.”

A non-stop work schedule has forced Sweeney to put her entrepreneurship studies at UCLA on hold. “I love school,” she says. “I would probably go for the rest of my life if I could.” Still, pursuing higher education has already delivered a powerful professional takeaway: “I feel more confident in meetings. It’s not that I love shocking people with my intelligence, but when you’re sitting in a room with men and all of a sudden they try to talk over you and you’re able to hold your ground, you impress them and they keep you in the conversation. There’s definitely a power in education.”

Personal style is another area where Sweeney is actively honing her skills. On the red carpet, she experiments with new styles while leaning into the vibe of the event, character or series. For the L.A. premiere of The White Lotus, which was shot in Hawaii, she appeared in a white tea-length Prada dress with a hem of black flowers. In her off-duty hours, Sweeney prioritizes comfort, typically choosing an oversized shirt and boyfriend jeans or overalls. “I have a lot of anxiety about putting outfits together, so I tend to lean toward an easy set or a day dress that I don’t have to think about that much,” she says. “I can wear it with sneakers or heels and a little cardigan. It’s versatile.”

But beauty is a different story. Here, Sydney Sweeney exudes confidence. With guidance from Melissa Hernandez, her personal makeup artist, and Doniella Davy, the Emmy-winning lead artist on Euphoria, Sweeney has discovered what works best for her oily combination skin that’s prone to cystic acne. “Makeup would split on my face,” she recalls. “In the first season, they would have to take it all off when lunchtime hit. We started experimenting and learned that it was more about the oils and lotions I was using. Skincare is the most important part.” Developing a minimalist approach, she finishes her routine with a $17 facial ice roller from Amazon. “I do it every morning,” she says. “I don’t know the scientific facts behind it, but putting something cold over my face seals it. Makeup just sits very well, and I feel I look more chiselled, too.” She has even dabbled in the TikTok beauty trend of mixing eyelash serums. The verdict? “It works! After two months, Donni was like, ‘We don’t have to put fake eyelashes on you anymore,’” says Sweeney.

When season two of Euphoria wraps, Sweeney will take her skill of turning 2-D worlds into 3-D experiences to the next level with her freshly launched production company, Fifty-Fifty Films. In partnership with Canadian Jean-Marc Vallée, who directed her in Sharp Objects, she’ll be starring in and producing The Players Table for HBO, an adaptation of Jessica Goodman’s debut novel They Wish They Were Us. “When I read the book, I immediately saw the entire thing in my head,” she says of the YA murder mystery that takes place at an exclusive prep school. “Being on-set with such incredibly talented filmmakers, and learning from them, has definitely sparked that side of my brain.” Sweeney feels lit up by this fresh challenge because it blends her creative skill set with her entrepreneurial yearnings. “I love building my characters so much; now I want to see if I can build an entire world,” she says.

Slated to star alongside her best friend, musician Halsey, Sweeney finds producing highly empowering and eye-opening. “Now I understand how some people get their names on things and they don’t want to do any work — I can’t work like that,” she stresses. “I have to put my handprint on a project instead of just my name. I make sure that I do the work.” Authentic female dialogue and innovative cinematic styles are two of the tools Sydney Sweeney is preparing to disrupt the industry with. “We’re in an era where we should be able to skew and mess up how filmmaking is done,” she says. “More people should take that risk of making interesting things to watch.” And we’ll all be tuning in when she does.

Arnold Schwarzenegger Involved in Multi-Car Accident
US airlines warn 5G could ground planes and cause ‘chaos’
Britain sends 2,000 anti-tank weapons to Ukraine amid fears of Russian invasion
‘Russia will pay heavy price’ if it invades Ukraine, Biden warns
‘No evidence’ Tory MPs are being intimidated and blackmailed, says Johnson