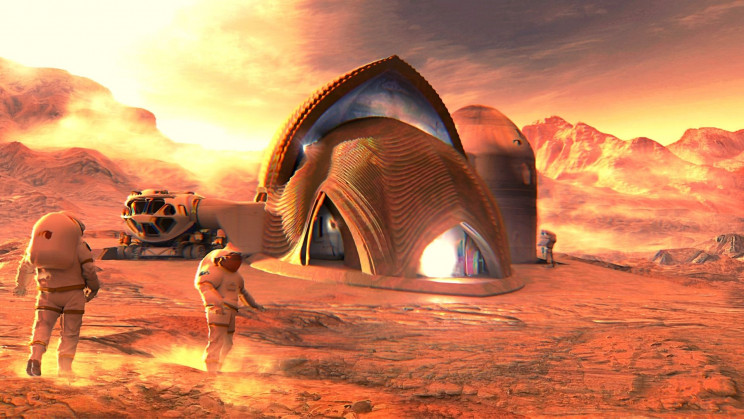 When two nations are in a race and one shuts its eyes and pretends that no competition is taking place, the nation that closes its eyes loses.  We don’t want that to happen to the USA.  But it is happening.

We all know that we are in a competition with China for world leadership.  But we fail to see that a crucial part of that competition is a space race.

China announced on Tuesday, June 15th at the Global Space Exploration Conference in St. Petersburg, Russia,[i] that it will land the first humans on Mars. That revelation was almost invisible in the press of the West.[ii]

The Head of  the China Academy of Launch Vehicle Technology, Wang Xiaojun, who made the announcement,  says that China’s Mars landing will happen in 2033. As geopolitical analyst and China expert Namrata Goswami points out, every target China has set for its space program, China has met.

America has an entrant in this Mars race, but it’s not NASA.  It’s Elon Musk’s SpaceX, which hopes to put humans on Mars by 2026.

NASA announced on April 16th[iii] that it will hire SpaceX to land Americans on the moon once again by 2024. Something Musk could do with the 100-passenger Starship he is developing at high speed in Boca Chica, Texas.

In fact, with the Starship, SpaceX could take passengers and cargo to the moon once a month and eventually once a week.  At the prices SpaceX aims for, it could provide 500 launches of the Starship for the cost of one launch of NASA’s moon rocket, a rocket that has never flown and can’t land on the moon—the Space Launch System.

But politicians like Eddie Bernice Johnson, head of the House Science Committee, have stopped NASA’s contract with SpaceX.

What does this have to do with our Mars race against the Chinese?  If obstructionists like Johnson would let NASA have its way and hire Musk to put the first woman on the moon in 2024, not only would we fulfill the goals of NASA’s Artemis program, but we would help Musk take a giant step toward his real goal: building the first city on Mars.

What’s at stake in this new Mars race?  For fifty years America has gained prestige from the Apollo program that landed humans on the moon in 1969. That prestige has shown how a valiant venture in space can cement leadership here on earth.  If China is the first to land humans on Mars, that prestige will go to Beijing.

If America retains its position as leader of the pack, human rights and democracy will continue to advance.  It’s as simple as that.

So if you care about human rights, you have to care about who wins the new Mars race.

5 Reasons Why This Was the Best Year for Music at Burning Man
LOWSH & Ghost in Real Life Create Deep House Magic with “Don’t Come Back” [LISTEN]
Kim Kardashian and Rihanna: The Looks that Broke the Internet
Running Touch Has the Power to Extend Summer With Latest Anthem, ‘Ceilings’
James Bond Casting Director Explains The ‘Rigorous’ Audition Daniel Craig’s Replacement Will Dive Into