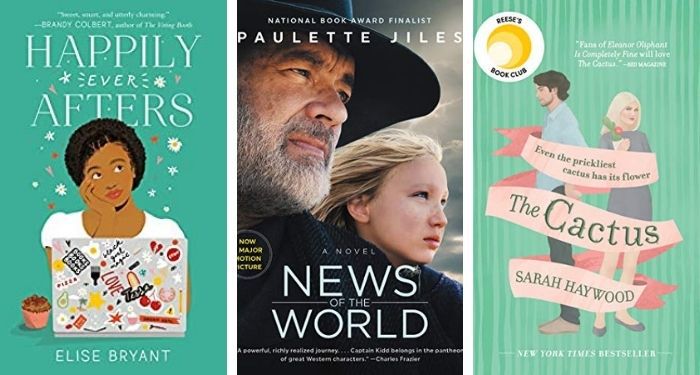 Kingdom of Souls by Rena Barron for $2.99

She Come By It Natural by Sarah Smarsh for $2.99

Polaris Rising by Jessie Mihalik for $1.99

My Sister the Serial Killer by Oyinkan Braithwaite for $1.99

The Other Americans by Laila Lalami for $1.99

Let Me Hear a Rhyme by Tiffany Jackson for $2.99

A Phoenix First Must Burn edited by Patrice Caldwell for $2.99

Homesick for Another World by Ottessa Moshfegh for $1.99

Infinity Son by Adam Silvera for $2.99

A Curse So Dark and Lonely by Brigid Kemmerer for $1.99

The Beautiful by Renée Ahdieh for $2.99

A Beautifully Foolish Endeavor by Hank Green for $1.99

The Stars and the Blackness Between Them for Junauda Petrus for $2.99

Rent a Boyfriend by Gloria Chao for $1.99

The Lager Queen of Minnesota by J. Ryan Stradal for $1.99

The Field Guide to the North American Teenager by Ben Philippe for $2.99

Obviously by Akilah Hughes for $2.99

The Language of Thorns by Leigh Bardguo for $2.99

Be Not Far From Me by Mindy McGinnis from $2.99

Now That I’ve Found You by Kristina Forest for $2.99

Annihilation by Jenn VanderMeer for $1.99

Defining Moments in Black History by Dick Gregory for $1.99

The Black Kids by Christina Hammonds Reed for $1.99

Trailblazer by Dorothy Butler Gilliam for $4.99

Unbroken by Marieke Nijkamp for $2.99

Hilary Duff Shares the Real Reason She Was Uninterested in Having Sex While Pregnant
New Falcon and the Winter Soldier Spot Teases How Sam Gets the Shield
5 of the Best Dark Thrillers on Kindle Unlimited
Alison Brie Defends Promising Young Woman’s Carey Mulligan After She Says Critic Deemed Her Not ‘Hot’ Enough
These $18 Slide Sandals Have 17,100 5-Star Amazon Reviews