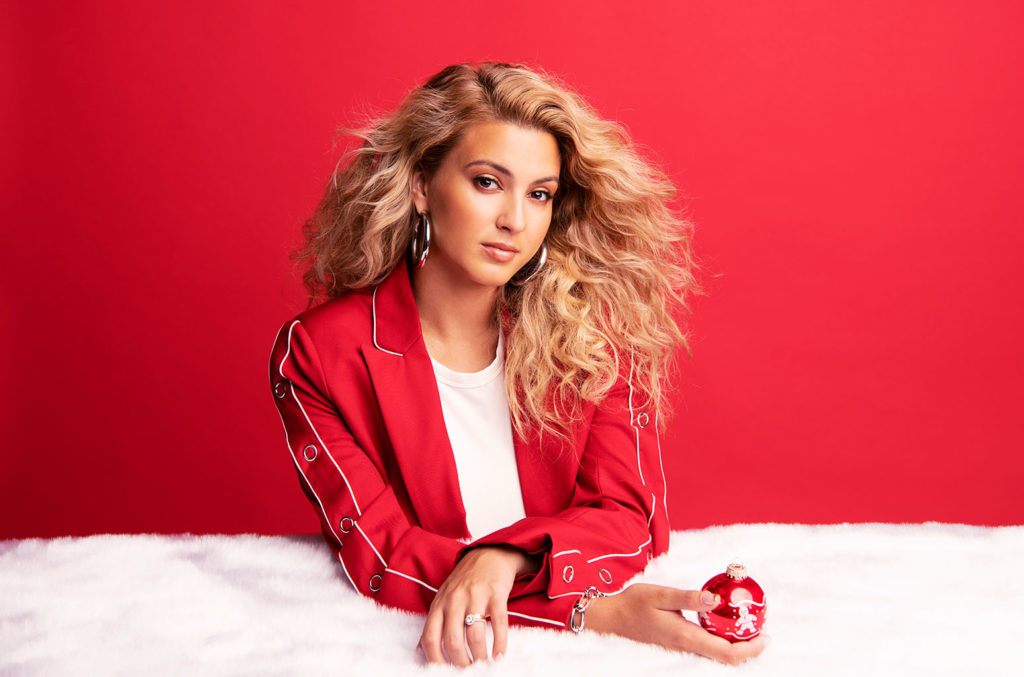 To find the appropriately-festive inspiration for her project, Kelly turned to the Christmas albums of her youth, citing everything from the Ella Fitzgerald records her dad would play in the house as she grew up, to lesser-known personal favorites like contemporary Christian singer Crystal Lewis (2000’s Holiday) and a cappella gospel group Take 6 (1999’s We Wish You a Merry Christmas).

However, it wasn’t until finding another holiday offering by Kenneth “Babyface” Edmonds that she was struck with the flash of genius that would help turn her Christmas dreams into a reality.

“When I decided to actually do a Christmas album this year, I knew that I should bring in a producer to help me oversee it and just really bring it to life,” Kelly says. “And I came across Babyface’s own Christmas album [1998’s Christmas with Babyface] that he put out a while ago. A lightbulb just went off, and I was like, ‘Oh my gosh, what if he produced my album? Like, that would be so insane.’ I thought it was a long shot, honestly. I did not think he would be down, or even, like, have the time to do it.”

As it turns out, not only was the R&B icon available, but his daughter was already a fan of Kelly’s, which helped connect the two singers after her team reached out with the idea. Immediately, the duo jumped headfirst into collaborating, testing out the waters of their new working relationship by crafting a grooving, jazz-inflected take on “Sleigh Ride,” complete with Kelly’s transcendent voice gliding over smooth horn blasts and doo-wop style backup singers.

“I was just excited to be working with him in general, but it was a good fit. We both were so excited after doing that first song,” she gushes of that initial session with Babyface. “I freaked out because when he sent me the finished version, I just was like, ‘Wow, this is a dream come true.’…That’s when it set in, the fact that Babyface was gonna be doing my Christmas album. So it’s pretty crazy, still, to say.”

In addition to overseeing the LP as executive producer, Babyface also lends his vocals as the sole guest feature on “Let It Snow,” a last-minute collaboration Kelly describes as “the little cherry on top” of her experience working with him.

“That was really cool of him to also lend his amazing, smooth vocals on that track,” she says of collaborating with the legend. “’Cause every time it comes on, his voice is so buttery and warm. I think it adds such a nice touch…it’s like the bow of the present, like a nice little bow on the album.”

To achieve the eclectic, “well-balanced” sound she was seeking for her first holiday album, Kelly also dove back into the gospel roots she first showcased on 2018’s Hiding Place — the sophomore passion project that earned the singer a pair of Grammy awards for best gospel album and best gospel performance/song back in 2019.

On A Tori Kelly Christmas, the star stays faithful to the spirit of several beloved hymns, including organ-drenched album opener “Silent Night” and Kelly’s sublime version of “O Holy Night,” but also flexes her creativity by combining the heavenly invitations of “O Come, O Come Emmanuel” and “O Come All Ye Faithful” and mashing up “Joy to the World” with an ecstatic reimagining of “Joyful, Joyful” from 1993’s Sister Act 2.

Never fear: that same pop culture savvy shines on the album’s more cheerily festive, secular covers as well — just look for the clever interpolation of *NSYNC’s “Merry Christmas, Happy Holidays” tucked into the bridge of immortal Donny Hathaway classic “This Christmas,” and try not to smile while listening to “Elf Interlude,” a thoroughly inventive a cappella interpretation of the instrumental theme from Elf. (Kelly gleefully cites the 2005 Will Ferrell vehicle as one of her all-time favorite movies — the singer’s Instagram Stories have been filled in recent weeks with videos of herself dressed as Buddy the Elf, making his sugary breakfast spaghetti and reciting the Code of the Elves from memory.)

Rounding out the dual reverence and exuberance of the album’s well-loved covers, Kelly also tackled the holy grail of the modern holiday album: the ever-elusive original Christmas song.

Working with a variety of collaborators over Zoom — a songwriting first for her — the star managed to cook up three new slices of pure Christmas magic: lead single “25th,” the lovestruck “Gift That Keeps on Giving” and sentimental piano ballad “Kid Again on Christmas.” (Co-written by Wrabel, the latter appears exclusively on the Target deluxe edition of the LP, alongside a truly stunning cover of Mariah Carey’s “All I Want For Christmas Is You.”)

“People don’t realize how difficult it is and how challenging it is to write a good Christmas song!” Kelly exclaims. “I don’t know what the secret is…it’s really finding that balance of, ‘How do we make this song feel still new and fresh and original, while at the same time having that nostalgic, classic feeling too?’ Because, you know, what hasn’t been said about Christmas? Pretty much every concept has been done, right? So how do you put that little twist on it?

To promote the album, Kelly flew to New York City earlier this week to make her debut in the 94th annual Macy’s Thanksgiving Day Parade, belting out “25th” from atop the picture-perfect village on Lifetime’s Christmas in the Square-themed float. And on Wednesday (Dec. 2), she’ll make her return to NBC’s Christmas in Rockefeller Center, an invitation that requires her to quarantine between events as one of the few artists to attend this year’s tree lighting ceremony in person.

“Obviously with this year, it’s gonna be unique, but everybody’s being super safe and taking all the necessary precautions and everything, and quarantining out there…wow, ‘quarantining.’ I hate how easily that came out of my mouth. 2020!” she jokes.

“I’m just happy that they asked me to come back and do it…It’s cool to go back and do all these things when I actually have a Christmas album. It makes it just feel even more special,” the singer adds.

Equally special will be Kelly’s own holiday season, which she reveals she’s planning to ”keep small” and spend with the few family members she’s able to see amid the ongoing pandemic. And yet, even given the unprecedented nature of the year in which she’s released her Christmas album into the world, the singer has nothing but quiet hope for the future.

“I think it’s going to be this kind of exhale moment,” she says of the forthcoming holiday. “Like, wow, we made it to the end of the year. And hopefully next year is a little better. I also hope that this album can just put smiles on people’s faces, you know?

“I want it to hopefully bring hope and light to people since, obviously, it’s been a pretty crazy year, to say the least,” Kelly concludes. “So I’m hoping this can just be my small contribution to the world, my gift to everybody this year.”

Stream A Tori Kelly Christmas below.