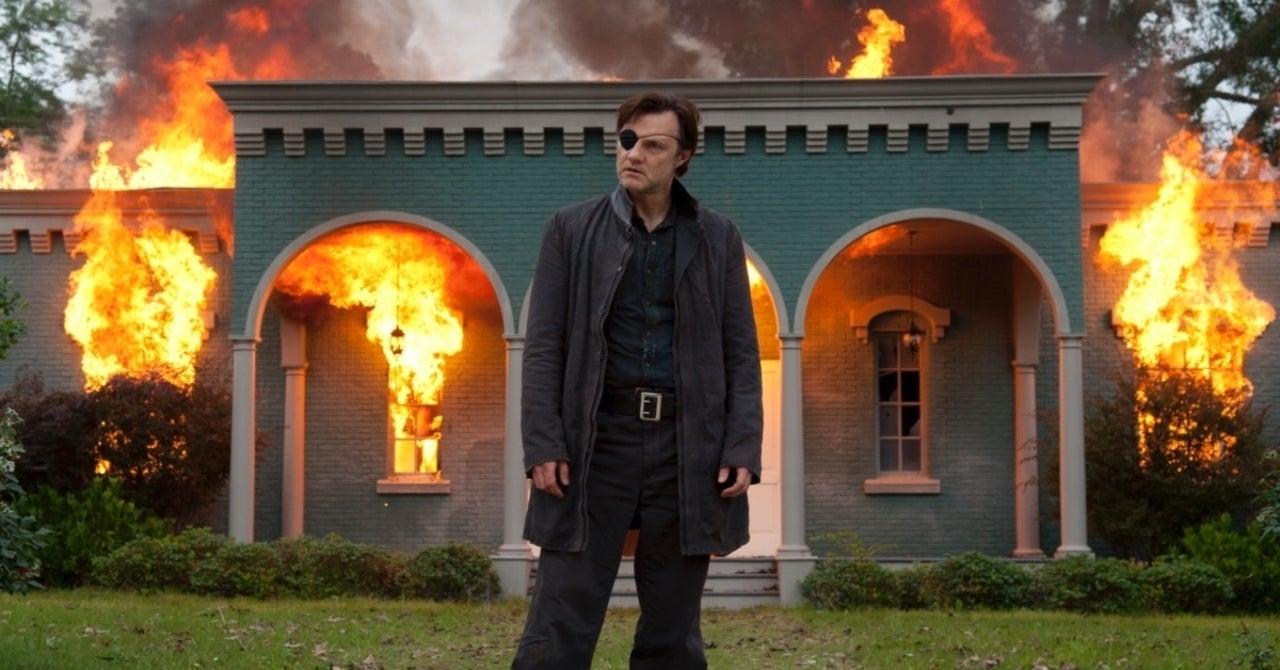 There are still “stories to be told” with the Governor, says former Walking Dead star David Morrissey, who wishes to return to the Walking Dead Universe for an adaptation of the novel series that fleshed out the villainous Woodbury leader. After killing off the character in issue 48 of his comic book series, creator Robert Kirkman teamed with author Jay Bonansinga for a collection of novels — The Rise of the Governor, The Road to Woodbury, and the two-part The Fall of the Governor — revealing the villain’s complex backstory. Should the live-action franchise revisit Morrissey’s Philip Blake before the events of The Walking Dead‘s third and fourth seasons, the actor hopes to return:

“Obviously, The Walking Dead comes from a graphic novel series by Robert Kirkman. There’s three novels within that: The Rise of the Governor, The Road to Woodbury, and The Fall of the Governor. They are brilliant stories,” Morrissey told Digital Spy. “If I returned, I’d love to return, in a filmic way, to tell those stories.”

Material from the novels appeared in fourth season episodes “Live Bait” and “Dead Weight,” both entirely focused on the Governor after he was run off by the group of survivors led by Rick Grimes (Andrew Lincoln) in the third season finale.

The Governor sought redemption while acting as protector of his short-lived adopted family — namely the young Meghan (Meyrick Murphy), alongside her mom Lilly (Audrey Marie Anderson) and aunt Tara (Alanna Masterson) — inspired by similar characters from the novel series.

Those episodes “were all me,” Morrissey said. “It was just my story. And I loved that. And I think there’s something to be told. There’s stories to be told in those novels that I think are really fascinating.”

Meghan was the would-be replacement for his dead daughter, Penny (Kylie Szymanski), whose reanimated corpse was kept chained in her father’s private quarters. The zombified Penny was ultimately put to rest when she was discovered by a sickened Michonne (Danai Gurira).

He continued, “And even to the point where he kept his daughter alive and people thought that was really weird and I thought that was really understandable, that this man would keep his daughter alive even though she’d gone over to the dark side. He loved her and why wouldn’t he keep her? And those complexities and weird surprising turns of character are what I loved about him.”

The Governor was eventually killed off during a climactic confrontation with the prison group in the show’s mid-season fourth finale, “Too Far Gone,” where he murdered Hershel (Scott Wilson) before being stabbed by Michonne and shot by Lilly. Morrissey last appeared in fifth season episode “What Happened What’s Going On,” where the Governor was briefly hallucinated by a dying Tyreese (Chad Coleman).

For all things TWD, follow the author @CameronBonomolo on Twitter. The Walking Dead next airs its Season 10 finale Sunday, October 4 on AMC.