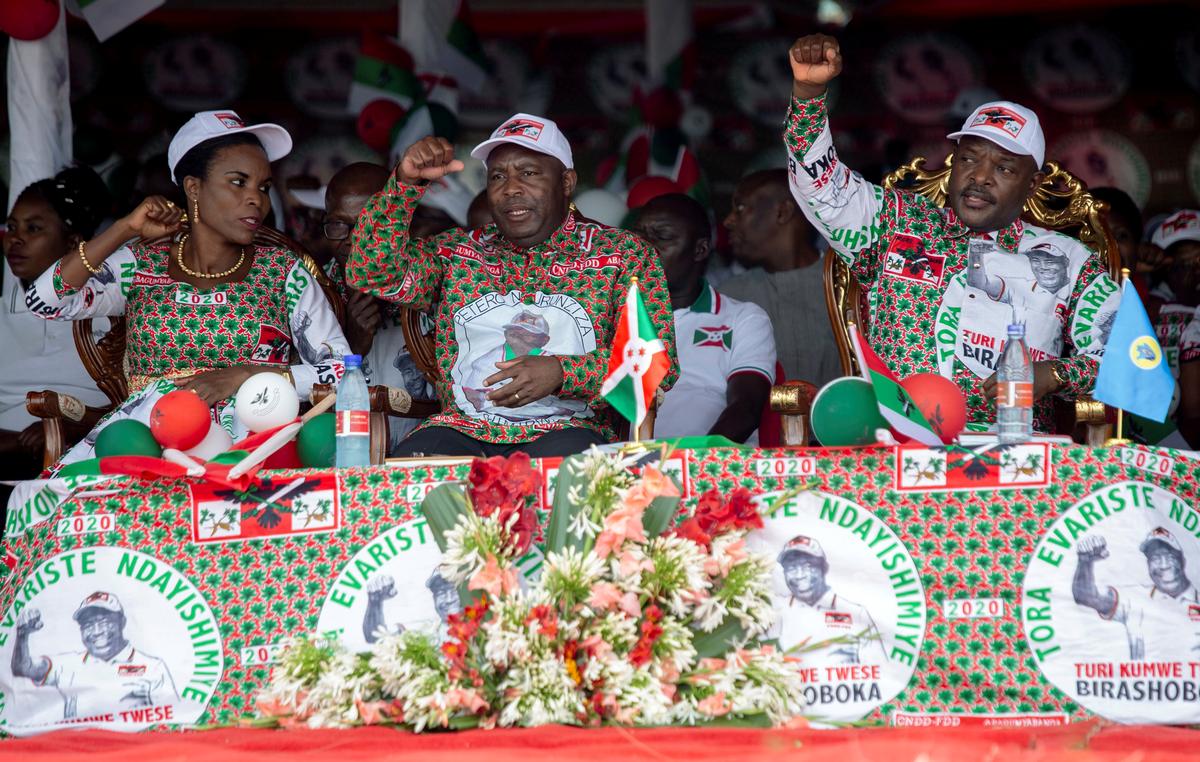 NAIROBI (Reuters) – Burundians began voting on Wednesday in their first competitive presidential election since a civil war erupted in 1993, with the election commission calling for a peaceful vote despite simmering political violence and the new coronavirus pandemic.

FILE PHOTO: Burundi’s President Pierre Nkurunziza and Evariste Ndayishimiye presidential candidate of the ruling party, the National Council for the Defense of Democracy-Forces for the Defense of Democracy (CNDD-FDD), with his wife Angeline Ndayubaha attend a campaign rally at the Bugendana Stadium in Gitega Province, Burundi April 27, 2020. REUTERS/Evrard Ngendakumana/File Photo

President Pierre Nkurunziza, whose government has repeatedly been accused of rights abuses, will step down after 15 years. His ruling CNDD-FDD party candidate, retired army general Evariste Ndayishimiye, is running against opposition leader Agathon Rwasa and five others.

“We call on Burundians to massively go to vote and vote peacefully. We need good elections,” Pierre Claver Kazihise, chairman for the election commission, known as CENI, said in comments aired by state broadcaster RTNB.

“The voter is asked to leave after casting their ballot. No gatherings are allowed near polling stations.”

The election is meant to usher in the first democratic transition in 58 years of independence for the impoverished east African nation, after widespread international criticism of its last election in 2015, when Nkurunziza ran for a third term.

His opponents said his participation violated a peace deal that ended the civil war and boycotted the poll.

The election sparked violent protests that drove hundreds of thousands of Burundians into exile. The United Nations documented hundreds of killings and the torture and gang-rape of opposition activists. Donors withdrew funding in protest.

Rwasa, like Nkurunziza a former rebel leader, warned about possible electoral fraud in his final rally on Sunday.

“We know there is plan of election fraud, some are even intimidating people asking for their voter cards to vote for them,” he said.

“All of that is worthless.”

The United Nations and the African Union said in a joint statement on Sunday they remained “concerned about reports of intimidation and violent clashes between supporters of opposing sides”.

There will be few election monitors after the government said they would have to spend 14 days in quarantine to prevent the spread of the new coronavirus.

The government expelled the national head of the World Health Organization (WHO) last week following public criticism that all parties were holding rallies despite the disease.

The country of 11 million people has reported only 42 coronavirus case and one death.

Testing remains very low, however, with only 633 tests carried out, according to the Africa Centres for Disease Control and Prevention.