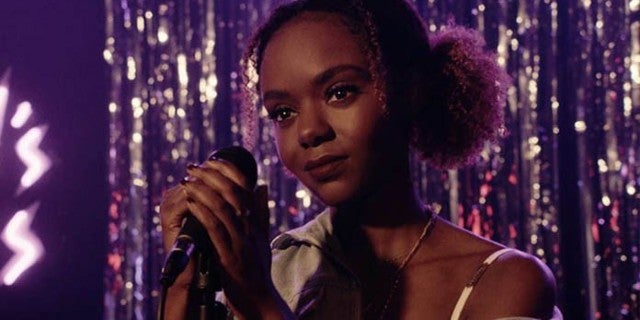 As Josie McCoy first on The CW‘s Riverdale and now on the spinoff series Katy Keene, Ashleigh Murray does quite a bit of singing and for good reason. Josie is working hard following her dream of being a famous singer and on Katy Keene in particular, fans frequently see her showcasing her talent with some incredible performances. But while Josie is comfortable breaking into song, Murray says that singing on the series is something that’s still “scary” for her.

In a recent interview with Elite Daily, Murray said that she gets nervous when it comes to recording her vocal performances and that she’s also very critical of all aspects of her work.

“I always get nervous when I have to record, because I’m worried about what people are going to think, and I’m really critical of it, the same way I am of my acting,” Murray said. “It’s still very scary for me. There will be 10, 20, 50 more positive tweets about my voice, but I’ll see that one [negative one] and it will affirm my own insecurity.”

Even with her own critical approach to her work, it’s not likely that Murray will be singing less on Katy Keene any time soon. On the series, Josie is trying to get her career off the ground in earnest and, in the upcoming episode “Chapter Nine: Wishin’ & a Hopin'” that will see her having to revisit her time as leader of Josie and the Pussycats when her manager-slash-love interest Alex Cabot decides to revitalize the group as a way to launch Josie’s career — though he will have a very different view on what the new incarnation of the group should be as compared to how Josie herself sees it. For fans who hope that maybe this is an opportunity for something of a Riverdale crossover, that’s not likely to be the case, though Murray did tell Elite Daily that she’d love to see some form of Riverdale crossover in the future.

“It’d be really cool to have Archie pop over and get pizza, and I don’t know, accidentally make out drunk at Molly’s Crisis,” Murray said.

You can check out the synopsis for “Chapter Nine: Wishin’ & a Hopin'” below.

TO GOOD TO BE TRUE – Katy (Lucy Hale) struggles with find her place with her new position and loses her confidence and turns to Gloria (Katherine LaNasa) who gives her good advice. Alex (Lucien Laviscount) wants to put together The Pussycats again, but what his dad envisions and what Josie (Ashleigh Murray) envisions for the group are two different things leaving Alex to make a tough choice. Jorge (Jonny Beauchamp) is happy that he is able to bring his current boyfriend and a budding friendship with an ex together, but things become a little messy. Meanwhile, Pepper (Julia Chan) is in an online feud that could ruin everything for her, and she is stunned when she learns who it is. Camille Hyde and Zane Holtz also star. Pamela Romanowsky directed the episode written by Mia Katherine Iverson.

Katy Keene airs on Thursday nights at 8 p.m. ET/PT on The CW, before episodes of Legacies. “Chapter Nine: Wishin’ & a Hopin'” will debut on April 16.

ComicBook Nation Podcast In this latest episode we breakdown the controversy surrounding the PS5, talk about some big movie and gaming release date changes, and preview how Wrestlemania 36 is continuing despite the Coronavirus Pandemic! Listen & Subscribe!