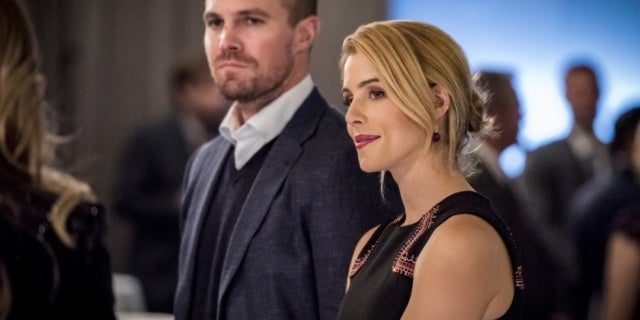 When Arrow begins its final ten episodes next month, it will be doing so without one of the series’ mainstays, after Emily Bett Rickards departed the show at the end of last season. While Rickards’ character of Felicity Smoak might not physically factor into the show’s final season, it sounds like her significance will still be felt, especially for her onscreen husband, Oliver Queen (Stephen Amell).

“She is ever-present in Oliver’s mind,” Amell said in a recent interview with TV Guide. “We found Oliver can’t wear his wedding ring in the premiere for a very specific reason, but he can wear it in the second episode. And it wasn’t built into the script, but I spoke to our director, Antonio Negret, and we built a moment of Oliver putting his ring back on and thinking about it. So Emily’s gone, off the show, but Felicity and William and Mia are ever-present in Oliver’s mind.”

In last season’s finale, Oliver was given the news that he would be dying in the upcoming “Crisis on Infinite Earths” crossover, and would need to join forces with The Monitor (LaMonica Garrett) to stop the event from further destroying the multiverse. Felicity elected to stay in seclusion to raise her and Oliver’s daughter Mia, but promised that the two of them would find each other again.

“That gives him purpose and allows him to move forward because he knows that somewhere along the way, in the immortal words of Chris Cooper from The Town, ‘This side or the other,’ they’ll find each other,” Amell added.

“You can’t have this season of Arrow without talking about Mia and Felicity,” David Ramsey, who plays John Diggle, added. “I think there’s even talks that Emily will be back. Who knows? So, you know, there’s hope.”

“I spent seven years of my 20s on this show — people fall in love with this character that I now have to say goodbye to,” Rickards said of playing Felicity in a convention appearance earlier this year. “She’ll always be a huge part of my life, as will all these people. I’m saying goodbye to a family I’ve been working with for the past seven years.”

“We sent her off in a beautiful way and she lives on in these people,” she added. “I see her everywhere I go, so it’s not totally goodbye.”

Albanians ‘should be barred’ from claiming UK asylum, minister says
Keke Palmer Is Pregnant, Reveals She’s Expecting Baby on SNL
Kate Spade 24-Hour Flash Deal: Get This $360 Tote Bag for Just $69
‘May the Force be with you’: PM ‘sad’ as Javid to step down at next general election
Grumpy / Sunshine Duo Books for Fans of Wednesday and Enid