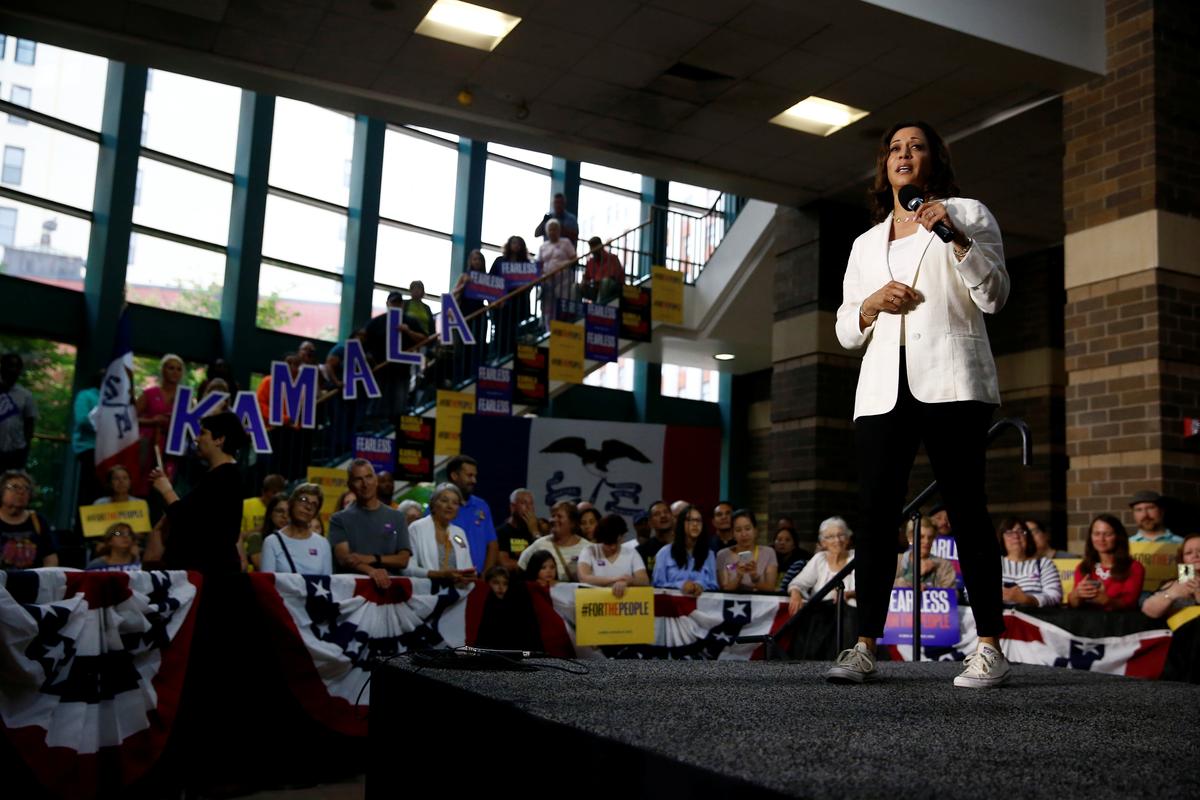 (Reuters) – U.S. presidential hopeful Kamala Harris’ campaign is finalizing a plan to tackle climate change that will center on cracking down on fossil fuel companies and protecting poor neighborhoods from the worst impacts of global warming, according to two sources familiar with the matter.

The plan is meant to set the U.S. senator from California apart in a crowded field of Democratic presidential candidates by drawing on her experience prosecuting polluters as a California attorney general and district attorney. At the same time it is intended to assuage environmental activists worried that she has downplayed climate change on the campaign trail.

All of the other top-tier presidential candidates have already detailed aggressive plans to eliminate U.S. greenhouse gas emissions within 10 to 30 years, tapping into what has become a crucial issue for Democratic voters.

“She wants to distinguish herself from other candidates that have already laid out climate plans with her own approach that plays to her strengths, focusing on environmental justice and enforcement,” said one of the sources.

Like the other candidates, Harris’ plan will also likely target a swift end to fossil fuels use, though the details are still being drafted, the sources said. The campaign is expected to release the plan ahead of a climate change-focused town hall with the candidates on Sept. 4, they said.

A spokeswoman for Harris’ campaign, Kate Waters, declined to comment on the details but said Harris would be releasing something “soon.”

While activist groups say they are generally happy with Harris’ environmental credentials, she has drawn their criticism since launching her presidential bid.

Last week, for example, she came under fire from the Sunrise Movement and other climate change activists when she initially declined to participate in the televised Sept. 4 climate change town hall to attend a fundraiser. Her campaign later announced she had changed her plans and would attend.

During campaign speeches, she tends to include a brief mention of climate change, calling it a real crisis and adding that she would re-engage the United States in global efforts to fight it if elected.

Republican President Donald Trump has rolled back U.S. climate change rules he views as damaging to the economy, and announced plans to withdraw the United States from the Paris climate agreement, an international accord to limit global warming.

Bahram Fazeli, director of research and policy for Communities for a Better Environment, a California-focused environmental justice group, said Harris’ record on the environment was “decent.”

As a senator, Harris was among the original co-sponsors of the Green New Deal – a nonbinding congressional resolution to zero out U.S. emissions by 2030 – and introduced bills to denounce Trump’s efforts to roll back California’s vehicle emissions standards and drill for oil and natural gas in federal waters. She has also co-sponsored an environmental justice bill with Green New Deal author congresswoman Alexandria Ocasio Cortez, which includes the creation of a federal office for environmental justice.

Previously, as California’s attorney general, Harris was charged with protecting the state’s progressive environmental laws in the courts. Her biggest environmental victory, according to green groups, came in 2016 when a grand jury indicted Plains All-American Pipeline on criminal charges related to a 2015 oil spill off the coast of Santa Barbara.

She also reportedly launched an investigation in 2016 into whether Exxon Mobil lied to the public and shareholders about the risks of climate change, though her office never confirmed the probe. Since then both New York and Massachusetts have pursued cases against the oil company.