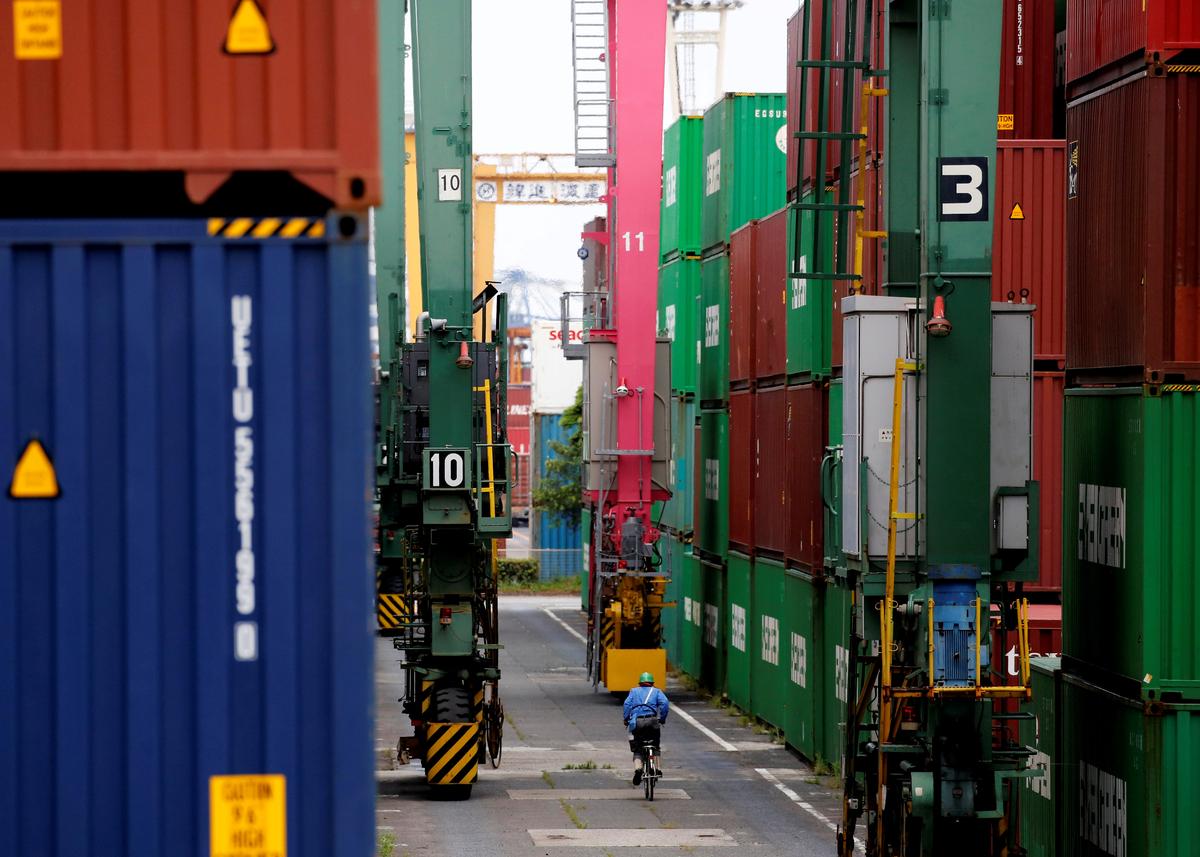 TOKYO (Reuters) – Japan’s exports slipped for an eight month in July, while manufacturers’ confidence turned negative for the first time in over six years as slowing global growth and the prolonged Sino-U.S trade war took a toll on the world’s third-biggest economy.

FILE PHOTO: A man in a bicycle drives past containers at an industrial port in Tokyo, Japan, May 22, 2019. REUTERS/Kim Kyung-Hoon/File Photo

The gloomy data adds to the challenge for Japanese policymakers worried that a prolonged downturn in external demand will drive a sharp economic downturn at home.

Exports in July fell 1.6% from a year earlier, Ministry of Finance data showed on Monday, dragged down by car parts and semiconductor production equipment. That compared with a 2.2% decrease expected by economists.

Anxiety about a global slump rose to fever pitch recently after an inversion in the U.S. Treasury yield curve implied a growing risk of a recession there, and data showed Germany’s economy was in contraction and China’s was worsening.

Export-reliant economies such as Japan have been hit hard by the Sino-U.S. tariff row, which has already upended supply chains and undermined global trade, investment and corporate earnings.

The negative reading comes as the Japanese economy grew faster than expected in April-June to mark the third straight quarter of expansion, as robust domestic consumption and business investment offset the negative contribution from external demand.

Japan has also been embroiled in an intensifying trade row with South Korea, further threatening to hurt the outlook for its manufacturers.

By region, Japan’s exports to the United States rose 8.4% in the year to July, driven by a jump in semiconductor production equipment, construction and mining machinery and airplanes.

It marked the tenth straight month of exports growth to the United States, following a 4.9% increase in June.

Imports from the United States advanced 3.5% in July, causing Japan’s trade surplus with the world’s biggest economy to rise 15.6% from a year earlier to 579.4 billion yen ($5.45 billion), the data showed.

Exports to China, Japan’s biggest trading partner, shrank 9.3% year-on-year in July, down for the fifth month.

Shipments to Asia, which account for more than half of Japan’s overall exports, declined 8.3% in the year to July.