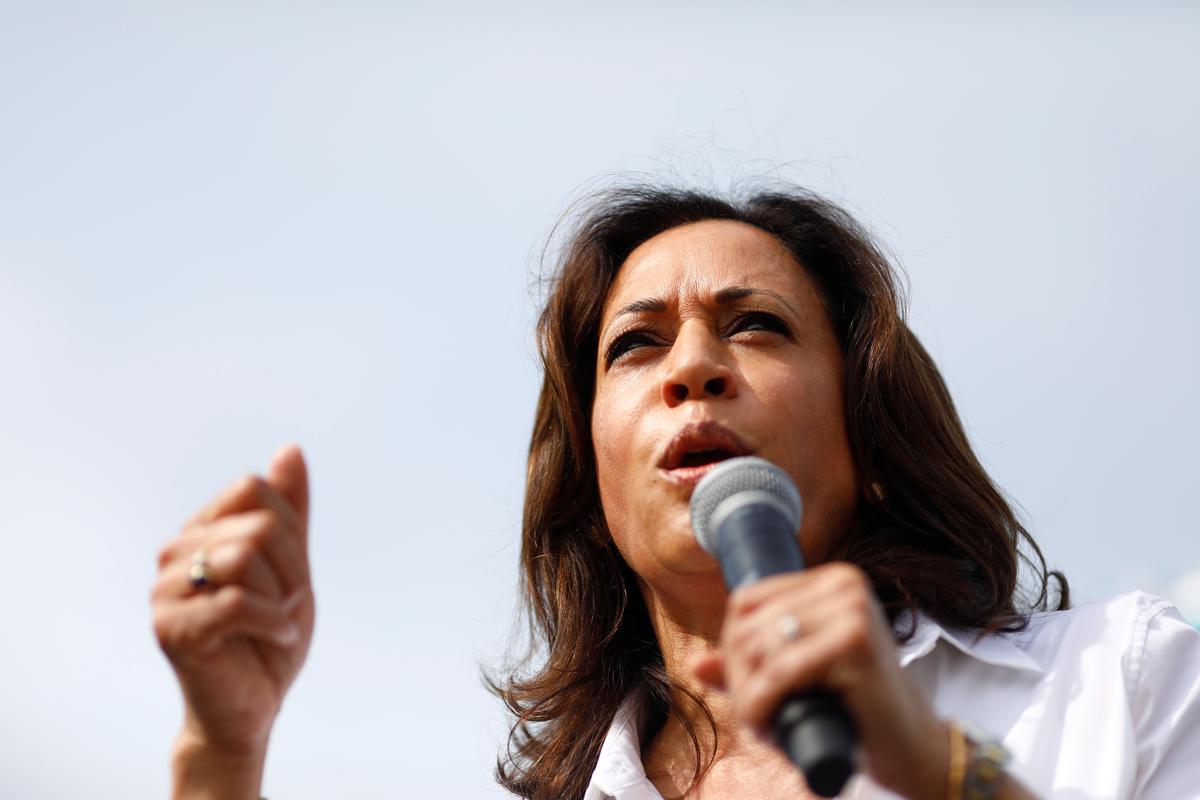 DES MOINES, Iowa (Reuters) – It was on the third day of a five-day bus tour across Iowa last week that 2020 White House contender Kamala Harris finally seemed to hit her stride.

Armed with fresh endorsements from two of the state’s most sought after political influencers early on Saturday, the U.S. Senator from California got an enthusiastic welcome from over 500 people at a Des Moines area high school.

For the first time during her tour that started on Thursday, the crowd began chanting Harris’ new slogan about Republican Donald Trump’s presidency: “Dude gotta go!”

The country needs a leader who can “prosecute the case against Donald Trump” and “it will take a prosecutor to do it,” Harris, California’s former top prosecutor and a former district attorney of San Francisco, told the audience. “And we’ve got quite the rap sheet.”

Harris, 54, is among two dozen Democrats vying for the party nomination to take on Trump in the November 2020 election.

Months after entering the presidential race as a relatively fresh face on the national stage, Harris, who is of Jamaican and south Asian descent, has ranked fourth in most national opinion polls, behind former Vice President Joe Biden and liberal U.S. Senators Elizabeth Warren of Massachusetts and Bernie Sanders of Vermont.

Her surge in support after the first Democratic presidential debate in June in Miami, where she successfully challenged Biden’s record on race, had dissipated by the second debate in July in Detroit, where she was attacked by lesser-known rivals.

A Reuters/Ipsos poll taken Aug. 1-5 showed that Biden remained in first place with 22% support, relatively unchanged from the month before. Harris was in fourth, dropping 4 points to 5.7% support over the same time period.

But in Iowa, there are signs that her campaign could be gaining traction. A Monmouth University poll released Aug. 8 showed Harris third in the state, with 11% support, behind Biden and Warren.

And on Saturday, her campaign announced major endorsements from Iowa power couple Sue and Bob Dvorsky, a former state party chairwoman and a former state senator, who supported former President Barack Obama in 2008 in his surprise upset over Hillary Clinton, then Clinton in 2016 when she eked out a win over Sanders.

The winner of Iowa’s Democratic caucuses has gone on to be the party’s nominee for the last six election cycles and Obama’s victory there in 2008 catapulted him from little-known junior U.S. senator to the White House.

In an interview with Reuters on Sunday, Harris said she felt that her performance in the second debate did not match her stand-out performance in Miami. But she shrugged off concerns about her momentum stalling.

“You know I’m a frontrunner and that became clear on the second debate in a way that it was not on the first. You’ve got to be prepared to take the hits when you’re a frontrunner and that’s what happened,” Harris told Reuters aboard a bus with “Kamala” written on it in large, capital letters.

“I honestly don’t pay attention to polls,” Harris said. “I hear about them but that’s not my North Star because if I had listened to the polls I would have never run for any office I’ve run for.”

During her Iowa campaign stops, Harris said repeatedly that she is in the race to win it.

Her five-day trip across the state has been a departure from the early months of her candidacy, when she courted key constituencies in urban centers and held private events while rivals relied on the traditional barnstorm politicking.

Many Iowans who plan to participate in the February caucuses told Reuters that it will be weeks or months before they settle on their top pick.

They said they were not troubled about Harris’ tendency to talk about policy in broad brush strokes, a trait that has earned criticism that she lacks a clear, specific vision.

Theresa Beckham, 49, came to a Saturday night event at a Des Moines winery to see Harris, who is on her shortlist along with Biden and Andrew Yang, a tech entrepreneur. She said Harris struck her as someone who would be able to beat Trump.

“I wanted to hear more about what’s most important to her. Things change all the time and I’d rather have a candidate that really thinks these things out,” said Beckham.

Attending the Des Moines high school rally on Saturday, Nancy Davis, 68, said that she was impressed by Harris’ forceful performance at the first debate but not overly concerned when she faltered during an exchange on healthcare during the second.

“Do we need Medicare for All? I’m not sure to be honest. If you have an option to get covered, that’s what’s important,” she added.

Harris said her repeated visits to Iowa have helped her refine her policy positions, including her proposal to raise teacher pay across the country.

This time, crossing the state from west to east on a bus, she told Reuters that she had “eye-opening moments” getting up close with issues in rural America.

Harris said the upside of the bus tour was “not helicoptering in and out, but being on the ground the whole time, looking out the window and stopping where we stop and visiting a farm but then also being at a church.”

She cited conversations with residents of a mobile home park who are grappling with skyrocketing rent after its recent purchase by an investment firm as eye-opening in terms of thinking about the lack of affordable housing.

“People sometimes mistakenly associate it (affordable housing) with urban areas but it’s all over the country,” Harris said.