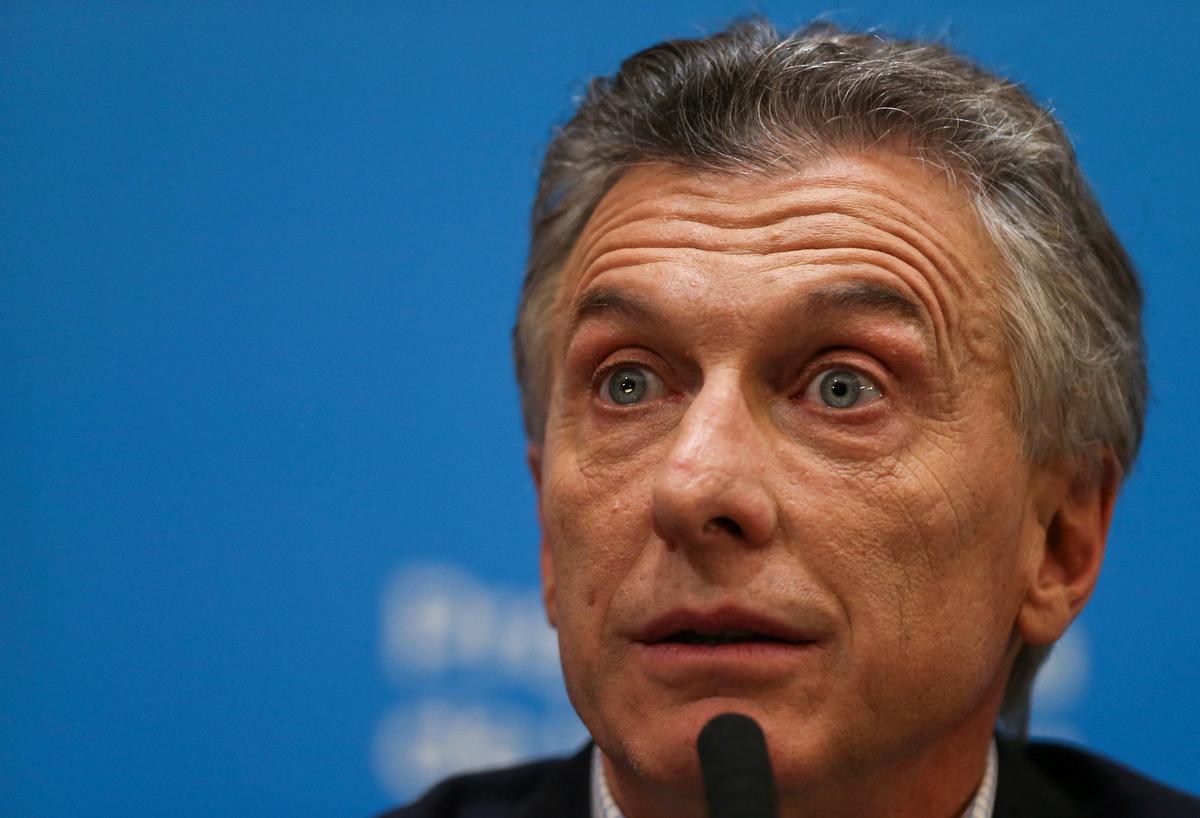 BUENOS AIRES (Reuters) – Argentine President Mauricio Macri vowed on Monday to win a second term despite a surprisingly strong performance by the opposition in the primary election that set off a shockwave through markets, crashing the peso currency and sending stocks and bonds tumbling.

Macri said he would “reverse” the result of Sunday’s primary, but acknowledged that a weaker peso triggered by the surge in support for Peronist opposition candidate Alberto Fernandez and his running mate former President Cristina Fernandez would fuel inflation.

The peso closed 15% weaker at 53.5 per U.S. dollar after plunging some 30% to a record low earlier in the day after the primary election prompted market fears over Argentina’s potential return to the interventionist economics of the previous government.

Refinitiv data showed Argentine stocks, bonds and the peso had not recorded this kind of simultaneous fall since the South American country’s 2001 economic crisis and debt default.

“I trust we will have a more even election in October that will allow us to go to a second round. Those who don’t want to go back to the past will join us,” Macri said at a news conference, adding that he was not considering a cabinet reshuffle.

Fernandez, a former cabinet chief, dominated the primary vote by a much wider-than-expected 15.5 percentage point margin over the president.

Fernandez has said he would seek to “rework” Argentina’s $57-billion standby agreement with the International Monetary Fund if he won October’s general election. An IMF spokeswoman declined to comment on the Argentine primary result, citing a policy of not commenting on political developments.

Despite Macri’s struggles to turn the economy round, investors see the Fernandez ticket as a riskier prospect.

Argentine stocks were among the top losers on the Nasdaq index, and the local Merval stock index closed 31% weaker. Falls of between 18-20 cents in Argentina’s benchmark 10-year bonds and century bond left them trading at around 60 cents on the dollar or even lower.

Morgan Stanley downgraded its recommendation for Argentina’s sovereign credit and equities from “neutral” to “underweight” and said calculations suggest the peso could fall another 20%.

“Given the narrow path ahead, our view is that a high degree of policy continuity is a must in order to maintain macro stability,” Morgan Stanley said in a research note. It predicted “further downside pressure and volatility” in bond prices.

Argentina’s central bank intervened, selling $105 million in the foreign exchange market to defend the peso in the face of the massive sell-off. The auction used the bank’s own reserves for the first time since September of last year, traders said.

Macri, a scion of one of Argentina’s wealthiest families, came to power in 2015 on promises to kick-start Latin America’s third-largest economy via a liberalization wave.

But the promised recovery has not materialized and Argentina is in recession with inflation at over 55%.

An acute financial crisis last year hit the peso and forced Macri to take the IMF loan in return for pledging to balance Argentina’s deficit.

Sunday’s result indicated that Fernandez had enough support to clinch the presidency in October’s first round, without having to go to a November run-off election.

A candidate needs at least 45% of the vote, or 40% and a difference of 10 percentage points over the second-place runner, in order to win the presidency outright.

Argentina’s main political parties had already chosen their presidential nominees, allowing the primary to serve as a first concrete measure of voter sentiment.

The peso weakening was dramatic but Win Thin, global head of currency strategy at Brown Brothers Harriman in New York, said he does not expect an emerging markets-wide contagion beyond perhaps Brazil and Uruguay given that the peso is not heavily traded.

Edward Glossop, Latin America economist for Capital Economics, predicted even higher inflation in a country that has fought against chronic rising prices for decades.

It is “completely feasible” for the peso to drop to as low as 70 per U.S. dollar, Glossop said.

Fernandez said the market reactions were in response to Macri’s failures on the economy.

“Markets react badly when they realize they were scammed. We are living a fictitious economy and the government is not giving answers,” he said in a radio interview Monday morning.

Voters were given a stark choice to stay the course of painful austerity measures under Macri or return to economic policies that are heavy on state involvement.

Kirchner imposed strict currency controls that slammed investment during her 2007-2015 administration. She fought with the farm sector over export taxes and presided over a multi-year standoff with bondholders that kept Argentina locked out of the international capital markets.

“I would say they (bonds) are pricing in a much higher probability of a default,” said Aberdeen Standard EM portfolio manager Viktor Szabo.

Szabo did add however that they were still above the 40 cents level that would truly reflect a fully fledged default.

Fernandez prevailed on Sunday in the majority of the country’s provinces, but one of the starker differences was seen in the poor suburbs of Buenos Aires.

What particularly dented Macri’s support were newly impoverished Argentines who were more energized to vote to punish him at the polls, political analysts said.

Analysts predicted Sunday’s results could be the final nail in the coffin for Macri.

“Macri has already implemented a number of short term measures to try and shore up support ahead of the October vote. Additional promises can be made, but the gap he needs to make up is a very wide one,” said Ilya Gofshteyn, senior emerging markets strategist at Standard Chartered Bank.

Right-wing Brazilian President Jair Bolsonaro warned that his country could see a wave of migrants fleeing Argentina if Fernandez wins the presidential election.

Bolsonaro has cast himself as foe to the left-wing leaders around Latin America and celebrated his friendship with Macri.

(Refiles to fix typo in headline.)