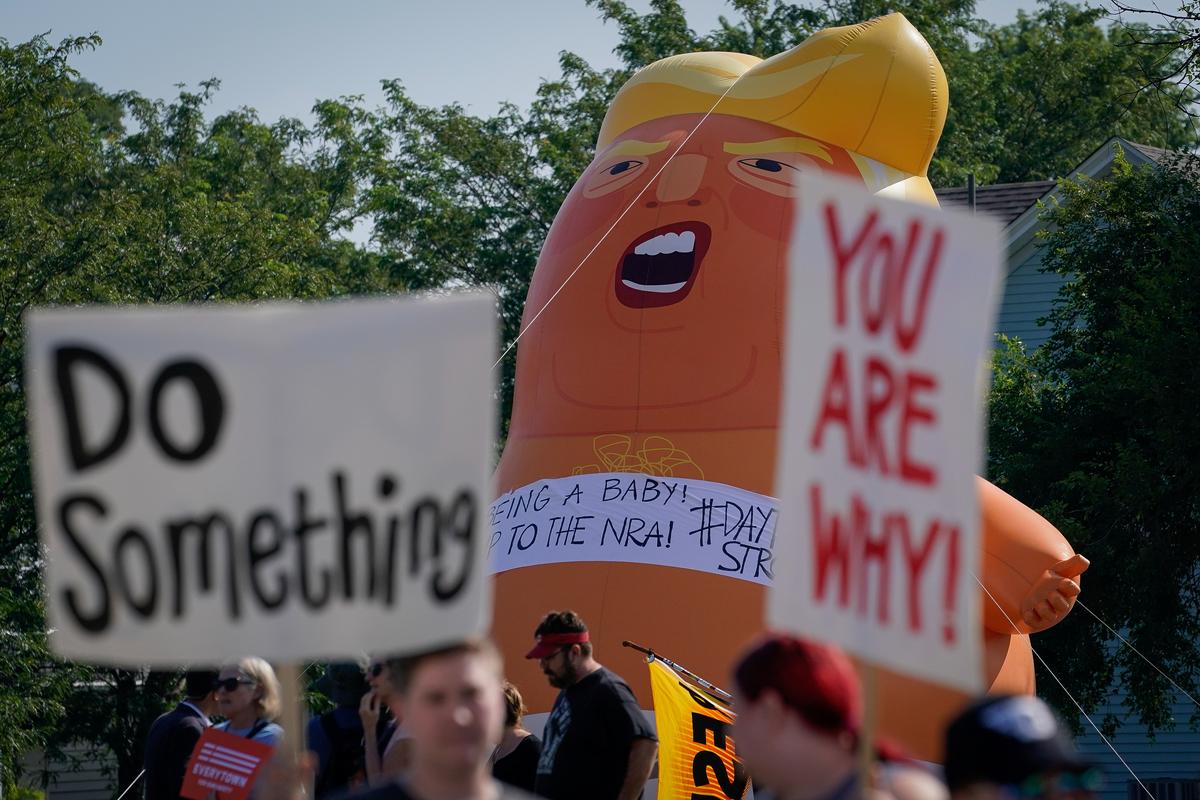 In El Paso, on the border with Mexico, Trump visited the University Medical Center where wounded victims were treated after a man who had posted an anti-immigrant manifesto online killed 22 people at a Walmart store on Saturday.

Hundreds of protesters, some holding signs reading “Trump is racist,” “Love over hate” and “Send him back!,” gathered under a broiling sun at a nearby park to condemn Trump and his presence in El Paso.

In a visit earlier in the day to Dayton, Ohio that was mostly out of public view, Trump met shooting victims at Miami Valley Hospital where the wounded were treated after nine people and the suspect were killed in a rampage early on Sunday. It was the second of two mass shootings 13 hours apart that shocked the country.

Crowds of protesters outside the hospital and in downtown Dayton chanted “Do something!” and held signs reading, “Hate not welcome here,” and “Stop this terror.”

White House spokeswoman Stephanie Grisham said the president and first lady Melania Trump met several victims in their hospital rooms and others who had been discharged in Ohio, and thanked the medical staff for their work.

“It was a warm and wonderful visit,” Trump said on Twitter. “Tremendous enthusiasm & even love.”

The back-to-back massacres have reopened the national debate over gun safety.

As he left the White House, Trump said he wanted to strengthen background checks for gun purchases and make sure mentally ill people did not carry guns. He predicted congressional support for those two measures but not for banning assault rifles.

“I can tell you that there is no political appetite for that at this moment,” Trump told reporters at the White House. “But I will certainly bring that up … There is a great appetite, and I mean a very strong appetite, for background checks.”

In Dayton, Trump was greeted at the airport by a bipartisan group of state and local officials, including Democratic Dayton Mayor Nan Whaley and Democratic U.S. Senator Sherrod Brown.

They told reporters afterward they urged Trump to call on Senate Republican leader Mitch McConnell to bring the Senate back from its summer recess to work on a House-passed bill that expands background checks on gun buyers.

Brown said he asked Trump to promise he would sign that bill. “He only said that we will get things done,” Brown said, adding the president had been “comforting” to the victims.

Whaley said she agreed with Trump’s decision not to visit the district where the shooting occurred given the high emotions in the community.

“A lot of people that own businesses in that district are not interested in the president being there,” she told reporters. “A lot of the time his talk can be very divisive and that’s the last thing we need in Dayton.”

The massacre in the predominantly Hispanic city of El Paso is being investigated as a hate crime and act of domestic terrorism, authorities said. They cited a racist manifesto posted online shortly before the shooting, which they attributed to the suspect. The FBI said the Dayton shooter had explored violent ideologies.

An open letter to Trump on Wednesday in the El Paso Times described the border city as having “a deep tradition of racial harmony” whose people came together after the tragedy. It admonished Trump for calling El Paso one of the country’s most dangerous cities in his February State of the Union address.

“He’s going to make war between us. Racism is starting to pop up more and more. Mexican people are fed up. He’s going to create chaos around here,” said Fernando Montoya, 45, who joined the protesters at the park.

On Monday, Trump gave a speech focusing on mental health reforms, tighter internet regulation and wider use of the death penalty. Democrats accused Trump of hiding behind talk of mental illness and the influence of social media rather than committing to laws to restrict gun ownership.

In Iowa, Democratic presidential front-runner Joe Biden said Trump had “fanned the flames” of white supremacy. “We have a president with a toxic tongue who has publicly and unapologetically embraced a political strategy of hate, racism, and division,” Biden said.

Asked on MSNBC if Trump is a white supremacist, O’Rourke said: “He is. He’s also made that very clear.”

Trump, in his televised White House speech on Monday, condemned “sinister ideologies” and hate. His supporters say Democrats unfairly blame him for the behavior of criminals.

She said on Twitter on Tuesday she declined a White House invitation to join Trump in El Paso after being told he was too busy to speak with her by phone in advance. “I refuse to be an accessory to his visit,” Escobar later told CNN.

Not everyone agreed that Trump should stay away.

“This is not a political visit,” El Paso Mayor Dee Margo told reporters. “He is president of the United States. So in that capacity, I will fulfill my obligations as mayor of El Paso to meet with the president and discuss whatever our needs are in this community.”

How Far the Light Reaches
Your EDM’s Top 10 Albums of 2022
E! Insider’s 20 Days of Giftmas Giveaways: Win a FP Movement Gift Card
Kate Spade 24-Hour Flash Deal: Get This $360 Tote Bag for Just $69
Christmas rail strikes to go ahead – as firefighters could become latest to walk out over pay