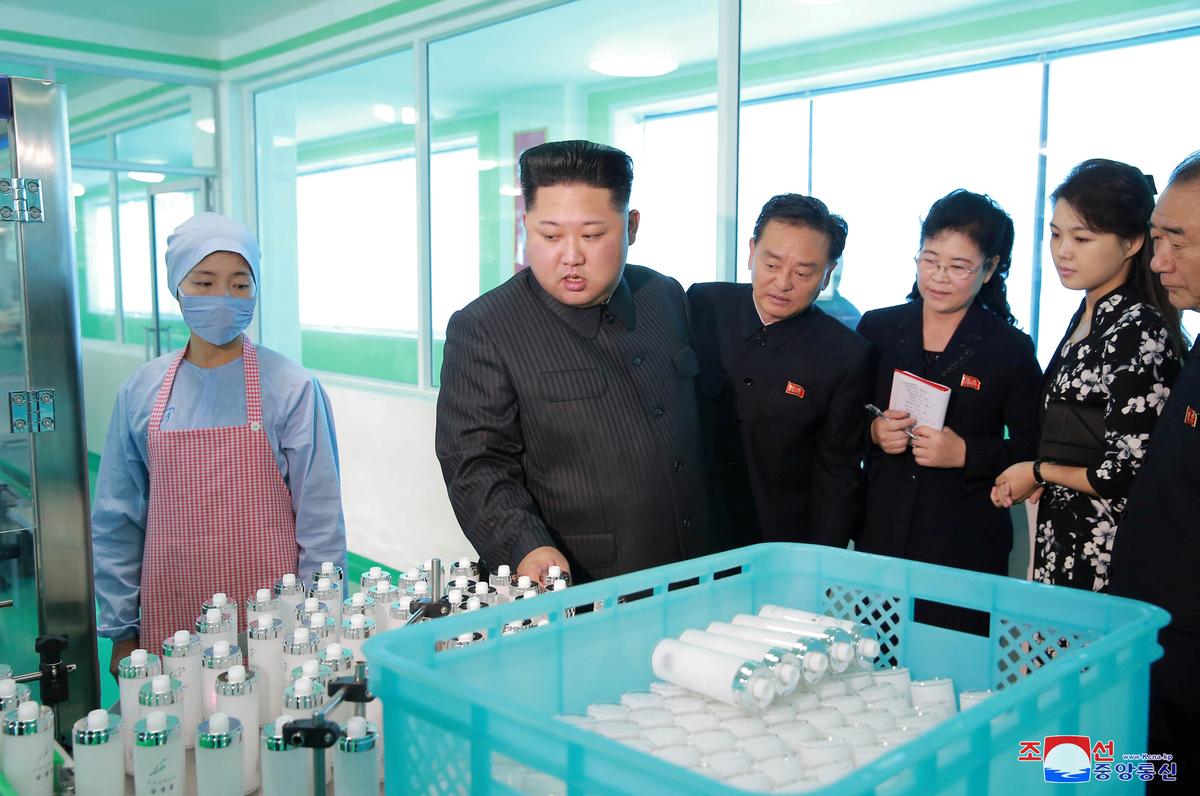 Promoting home-grown beauty has been a political strategy since the days of state founder Kim Il Sung, but has become more focused under his foreign-educated grandson, Kim Jong Un.

The international popularity in recent years of South Korea’s K-beauty trend – innovative cosmetic products with natural ingredients such as ginseng and snail slime – has added momentum, say defectors who fled the North and experts who study the isolated state.

But North Korea’s push has yet to translate to a winning formula, marred by quality issues and constraints in obtaining foreign ingredients due to sanctions over its nuclear program.

“Foreign eye liners or mascaras stay on even after get into water, but domestic products make raccoon eyes even with just a yawn,” Kim said during his visit to a Pyongyang cosmetics factory in 2015, according to the Japan-based Choson Sinbo newspaper.

But Kim has since visited cosmetics factories several times with his wife to promote the products.

Chanel, in response to Reuters’ questions, said it did not export products to North Korea and any items on sale there were likely counterfeits or diverted products.

North Korea has long regulated its citizens’ appearance. Hair dyeing, blue jeans and clothes with writing in English were banned under Kim’s father, Kim Jong Il, as the reclusive country tried to keep western influences out.

But that has changed since Kim came to power in 2011 and began making public appearances with first lady Ri Sol Ju, a former member of a pop orchestra.

Nam Sung-wook, a professor of North Korean studies at Korea University, said the young first lady’s short haircut and colorful suits appealed to a desire for self-expression within the constraints of North Korea’s society.

“There was no role for the first lady in Kim Jong Il’s era,” Nam said. “But the Kim Jong Un era gave rise to first lady Ri Sol Ju, who furthered the regime’s interest in cosmetics.”

Kang Na-ra is one North Korean defector who said she used to buy South Korean cosmetics at private markets known as jangmadang that are the backbone of the North’s informal market economy.

“I really wanted to copy K-pop idol’s make-up style when I was in the North,” she said.

Today women are encouraged to follow style trends set by the first lady or the ‘Moranbong’ band, Pyongyang’s all-female answer to K-pop.

“North Korea is such a tightly controlled society and a style we can follow is very limited. Ri Sol Ju or Moranbong band members are our only allowable role models,” said the 21-year-old Kang who fled to the South in 2014 and now runs a YouTube channel sharing tips on beauty and North Korean culture.

Pyongyang Cosmetic Factory shipped its first batch of Unhasu brand cosmetics to a new boutique in Moscow in May, Russian media reported.

The company, which targets Russian women and has over 10,000 customers, said the selling point for North Korean products was their natural ingredients and minimal preservatives.

“I am a fan of all kind of new cosmetics, and it was especially interesting because it’s North Korean,” said Margarita Kiselyova, 45, a Russian customer who bought aloe vera moisturizer and anti-ageing cream. “Overall, I am satisfied with the quality.”

Amorepacific told Reuters it did not have further details of the tests.

Pyongyang Cosmetic Factory says its Unhasu line has received quality assurance certification from the International Organization for Standardization (ISO) and Russia-led Eurasian Economic Union (EEU) but Reuters could not independently verify those claims.

“Even if it’s hard to get, people try to buy South Korean cosmetics for their fiancés as a wedding gift, since it is regarded as the best and symbol of wealth,” Kang Mi-jin said.

‘My heart broke for the little girl I used to be’: Abortion ruling deepens divisions in small-town America
When Did It Become Cool Again to Like Barbie?
Laura Dern Had To Remind Jeff Goldblum Why He Was So Shirtless And Sweaty In Iconic Jurassic Park Scene
Crunch talks between RMT and Network Rail begin as union threatens further strikes
Copenhagen suspect uploaded YouTube videos of him holding guns day before shooting