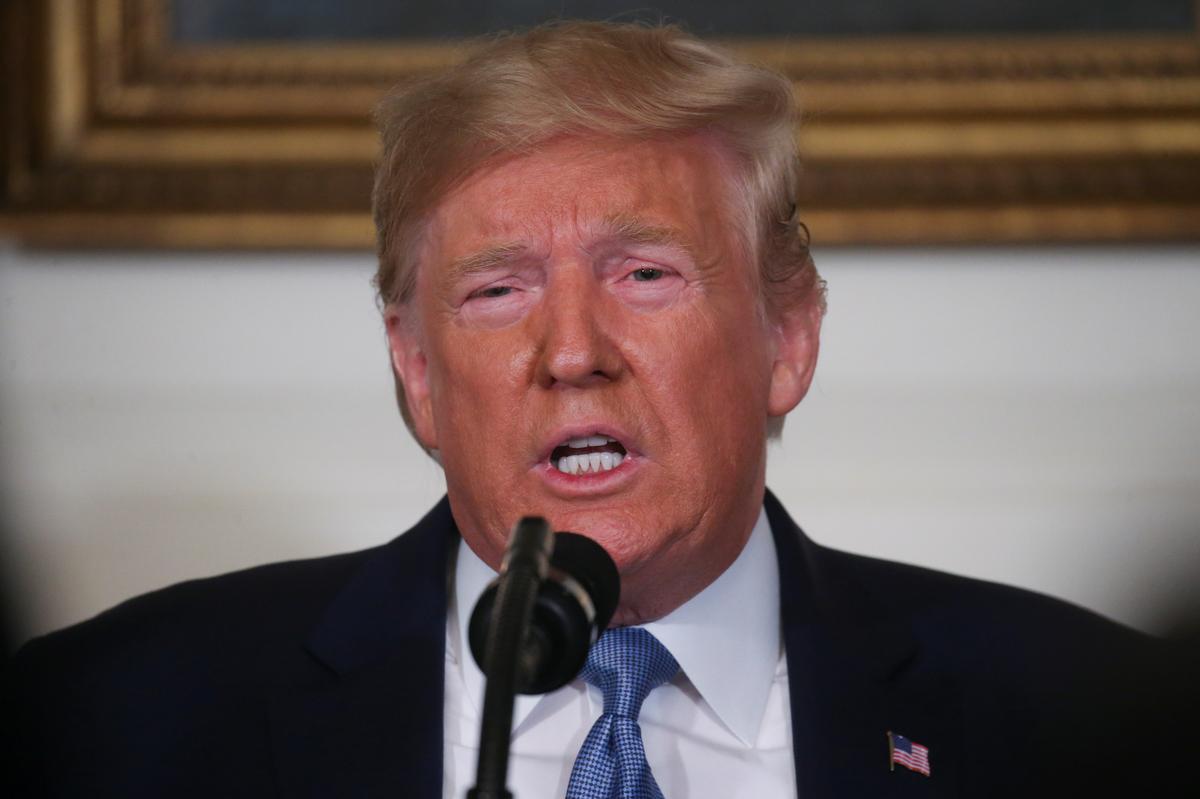 WASHINGTON (Reuters) – After back-to-back mass shootings in two states over the weekend spurred widespread condemnation of his rhetoric and style, President Donald Trump chose to suppress his instinct to attack his rivals – at least for now.

U.S. President Donald Trump speaks about the shootings in El Paso and Dayton in the Diplomatic Room of the White House in Washington, U.S., August 5, 2019. REUTERS/Leah Millis

Trump has spent a large part of the summer engaged in attacks on four minority congresswomen and an African-American lawmaker from Baltimore. He has long railed against illegal immigrants, characterizing a surge of asylum seekers from Central America as an “invasion.”

That rhetoric and his hardline immigration policies have exposed Trump to sharp criticism since a lone gunman, who law enforcement authorities say apparently was driven by racial hatred, killed 22 people in a Walmart store in El Paso, a Texas city that sits on the border with Mexico, on Saturday.

A person regularly in contact with Trump and the White House said the Republican president understood that some of his rhetoric may have gone too far and could jeopardize his chances for re-election in November 2020.

“He recognizes that, in a lot of ways, he is playing with fire and walking a tightrope,” the source said.

When Trump spoke at the White House on Monday about the shooting in El Paso and the weekend’s other massacre, in Dayton, Ohio, he tried to focus on empathy for the victims and condemnation of the killers, as well as bigotry, racism and white supremacy.

He did not engage with Democrats and others who have linked the violence to his inflammatory tweets and comments widely criticized as racist.

Advisers said the tone and formal staging for Trump’s remarks were designed to demonstrate leadership during a difficult time.

“There is a renewed desire by many people to show him being presidential,” a second source close to the White House said. “When you have a national tragedy, that’s what the country wants. They don’t want vitriol, they don’t want rhetoric, they don’t want verbose propaganda.”

After the weekend shootings, Trump talked to state and local officials in Texas and Ohio, as well as Cabinet members, lawmakers, family members and informal advisers by phone from his New Jersey golf club.

The man charged with the attack in El Paso has been linked to a racist, anti-immigrant manifesto posted online, and the murders are being investigated as hate crimes. Eight of those killed were Mexican citizens.

Trump watched as Democrats vying to run against him in the November 2020 presidential election appeared on television to blame him for stoking racism and division in America.

He told his staff he wanted to return to Washington and speak to the nation about what had happened and what to do about it.

“He underscored that it would be important that the delivery would be somber,” a senior administration official said, speaking on condition of anonymity.

Aside from one tweet on Monday morning blaming the media for “contributing greatly to the anger and rage” in America, Trump was much more restrained than usual.

He initially told advisers he wanted to speak from the Rose Garden, but then opted for the Diplomatic Room, condemning racism and white supremacy while standing beneath a portrait of the country’s first president, George Washington.

It was the same setting for speeches he had delivered in the wake of mass shootings at a Las Vegas concert, a Florida high school, and a Virginia baseball practice where his friend Republican Whip Steve Scalise was injured.

Trump emphasized he wanted to show he would take action, the senior administration official said.

But he stayed away from suggesting any sweeping changes to gun laws, and there were no details of how he would deliver on his list of ideas: more resources to address hate crimes, reforming mental health laws, working with social media companies on tools to detect potential mass shooters, addressing video game violence, and keeping guns away from people known to pose a risk of violence.

Critics quickly accused him of ignoring the issue of gun control, and repeated the allegation that he was partly to blame for the El Paso attack.

Trump was also panned for a gaffe near the end of his speech when he said, “May God bless the memory of those who perished in Toledo.” The shooting was in Dayton. The city of Toledo is in a different part of Ohio.

White House adviser Kellyanne Conway drew a contrast between Trump’s remarks and those of Democrats, who she said had gone over the top with criticism in the hours after the tragedy.

Trump “did not respond in kind today in his remarks. He put politics and partisanship aside,” Conway told reporters.

Trump has a history of making inflammatory remarks, backing down, and then making them again. Some Republicans said that tendency – if it occurs with regard to the shootings – could hurt him in 2020.

“That’s an issue,” said Republican strategist Charlie Black, adding that Trump needs to continue with his new message. “We’ll see what he does and if he sticks to it.”

At some point, Trump probably will defend himself against critics, said Chris Barron, a pro-Trump Republican strategist.

“The president does punch back, and I think that it is highly unlikely that he’s simply going to take incoming from his political rivals who again view this tragedy as a club by which to beat the president about the head,” Barron said.