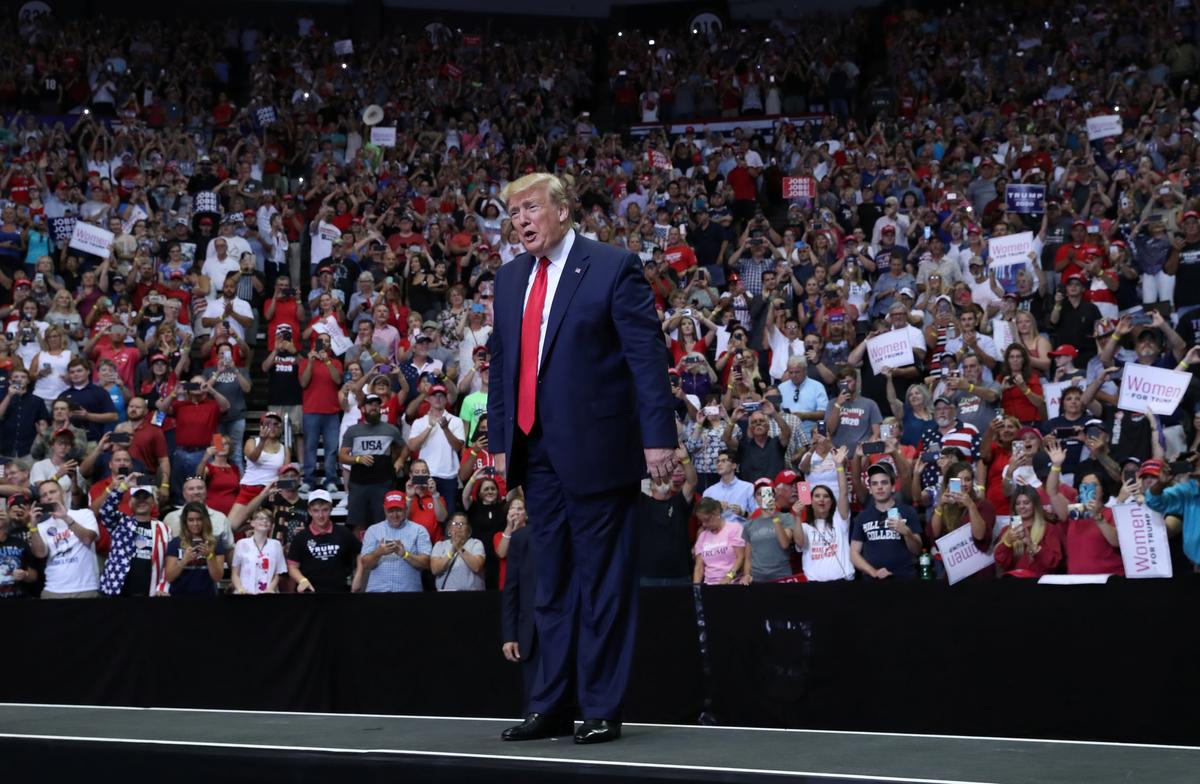 CINCINNATI (Reuters) – This time, he didn’t quite go there.

President Donald Trump on Thursday briefly renewed his criticism of four minority Democratic congresswomen at his first rally since controversy erupted when a crowd at a rally last month broke into a chant of “Send her back” about a U.S. lawmaker who immigrated to the United States from Somalia.

But he did not name or dwell on them. The crowd as a whole did not chant, and the president – who was being watched for his response if such a unified cry erupted – did not have to show whether he would try to stop his supporters from engaging in a call that critics view as racist.

“While Republicans are working every day to build up our country, the rage-filled Democrat Party is trying to tear America apart. The Democrat Party is now being led by four left-wing extremists who reject everything that we hold dear,” Trump told the crowd in Ohio, making reference to U.S. Representative Ilhan Omar and three colleagues known as “the Squad.”

“No one has paid a higher price for the far-left’s destructive agenda than Americans living in our nation’s inner cities,” he said.

And that was that. Trump continued on a long riff about Democrats’ performance in inner cities, but he did not name Elijah Cummings, a black U.S. congressman from Baltimore and civil rights champion, whom Trump has also recently criticized.

Trump still had plenty to say about his opponents, and the enthusiastic crowd chanted: “Lock Her Up!” when the president criticized his 2016 Democratic presidential rival, Hillary Clinton.

The Republican president also picked up on a theme from Wednesday night’s Democratic presidential debate, in which former Democratic President Barack Obama’s legacy came under criticism from some candidates seeking their party’s nomination to run against Trump next year. Trump said they spent more time attacking Obama than they did attacking him.

Democrats have criticized the attacks by Trump on Omar and the three other progressive congresswomen as racist. The attacks started with Trump’s tweets last month saying they should “go back” to where they came from. Many Republicans have shrugged off the remarks.

All four are U.S. citizens and Omar is the only one not born in the United States.

Trump looked on when supporters chanted: “Send Her back!” at a July 17 North Carolina rally after he recounted past comments by Omar [nL2N24J02S]. The next day, he said he disagreed with the chant, but later resumed his criticism of the congresswomen, saying they had said horrible things about the United States and defending the North Carolina crowd as “incredible patriots.” [nL2N24J1A6][nL2N24K159]

Before he left for Cincinnati, Trump was asked by reporters at the White House whether he would stop rally participants if they started that chant.

“I don’t know that you can stop people. … I’d prefer that they don’t. But if they do it, we’ll have to make a decision then.”

Petrol retailers accused of ‘rocket and feather’ pricing as unleaded hits new record
Ahead Of His Zeus Debut In Thor: Love And Thunder, Russell Crowe Is Joining A Supernatural Thriller
Tearing up NI trade deal is ‘illegal and unrealistic’, EU envoy warns
Jussie Smollett Makes Rare Appearance at the 2022 BET Awards
9 Of The Best Hair Oil For Men (2022 Edition)