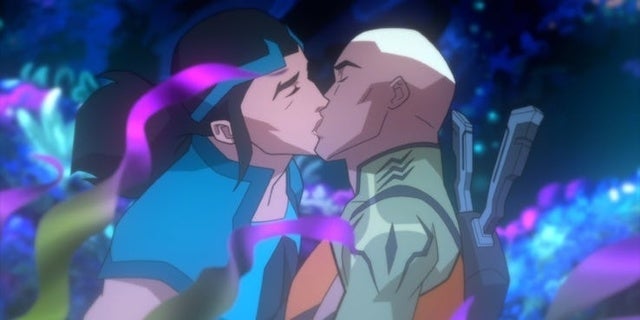 During the latest episode of the fan-favorite revival of Young Justice on DC Universe, Young Justice: Outsiders, one of the show’s most pivotal characters was revealed to be a member of the LGBTQ community. Kaldur’ahm, formerly known as Aqualad and now serving as the show’s Aquaman, is confirmed to be in a relationship with an Atlantean man.

At the end of Tuesday’s new episode, “Quiet Conversations,” there is a montage of various characters reuniting with their loved ones. This includes a brief scene of Wyynde, an Atlantean who works with King Orin, approaching Kaldur. The two men hold hands before exchanging a kiss, revealing their relationship. While Kaldur and Wyynde were enemies back during the Purist Crisis, it seems as though they’ve developed a romantic relationship in the years since.

Kaldur has not specifically addressed his sexuality on the show, saying whether he’s gay, bisexual, etc. He is clearly in a relationship with a man at this time but he has been in love with a woman on the show in past seasons.

Remember, Kaldur had strong feelings for Tula, his classmate from the Conservatory of Sorcery. She dated Garth for a long time and that was difficult for Kaldur, but he eventually accepted their relationship. Tula died during a mission and that was a big reason why Kaldur chose to leave the team.

While the news of Kaldur’s sexuality may be new to fans of the show, Aqualad has been a prominent gay character in the comics for some time. It was revealed shortly after his 2010 debut that he was gay, though his shelf life didn’t last too long; he was lost to the reshuffling of the DC Universe at the launch of New 52 in 2011. However, he returned in 2016’s Teen Titans and it was confirmed that the new iteration of the character was gay as well.

It’s unclear whether or not Kaldur’s relationship with Wyynde will be addressed in later episodes of the series.

New episodes of Young Justice: Outsiders are released on DC Universe each week.

The crew is recovered from Comic-Con and we’re deep-diving into the newest must watch Amazon series and more. The Boys is officially binge-able, Once Upon a Time in Hollywood is the history lesson we all need, and the new Walking Dead series might already be dead – we’re tackling it all in episode 52 of #ComicBookNation! Make sure to subscribe now to never miss an episode!

Man arrested over fatal shooting of Migos rapper Takeoff
Oil cartel sticks to targets despite uncertainty over new sanctions on Russia
Megan Fox Drops Photos Of A Daring Outfit And Apparently Side Butt Is The Latest Thing
Rezz opens up in rare interview on mental health, insomnia, relationships & more
Angela Bassett Recalls How A 12-Year-Old Keke Palmer Actually Got Her The Role As Her Mother In Akeelah And The Bee