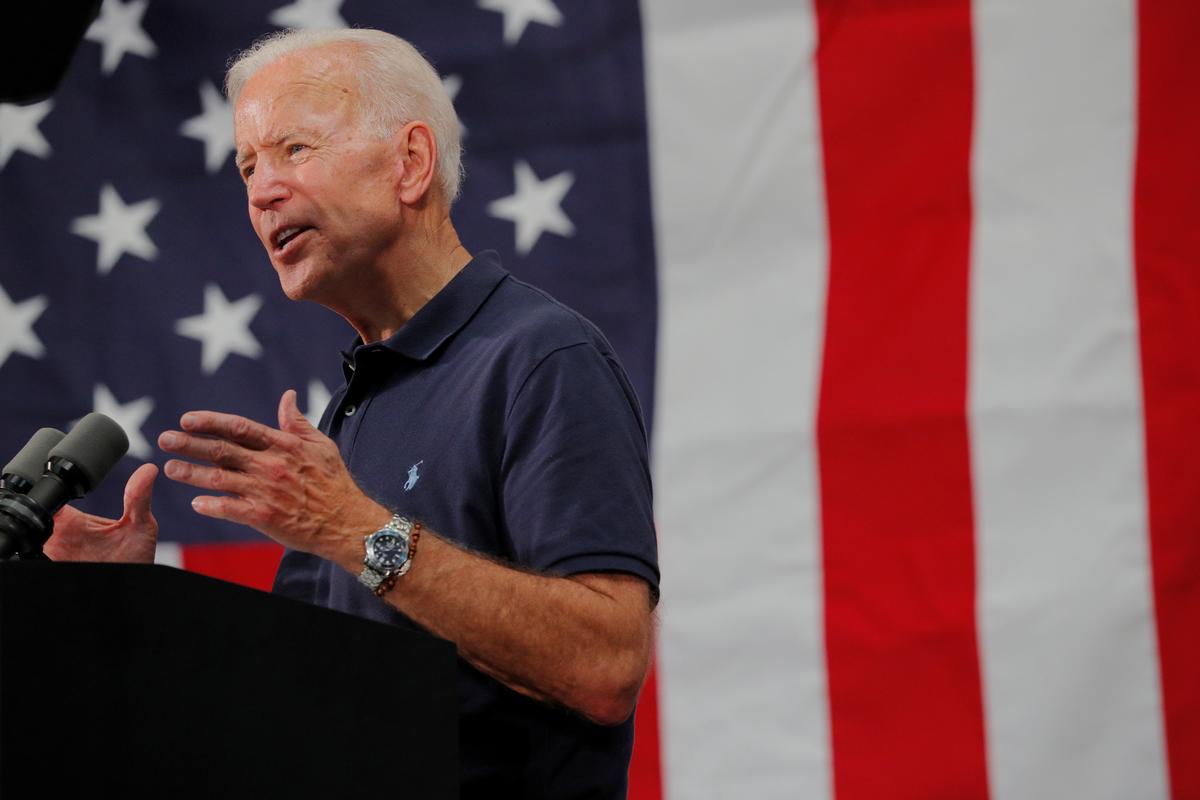 DETROIT (Reuters) – Joe Biden says he is done being polite when it comes to defending his decades-long record on race.

But when the former vice president is flanked on the debate stage Wednesday night by U.S. Senators Kamala Harris of California and Cory Booker of New Jersey, who in recent weeks have called into question Biden’s commitment to racial justice, how he responds to their criticism will matter.

The sparring between the front-runner and his two black rivals for the Democratic Party’s nomination to take on President Donald Trump in November 2020 is likely to figure prominently when they meet in Detroit.

Biden has broad backing from black voters after serving for eight years under Barack Obama, the first black U.S. president. But Harris and Booker, seeking to chip away at that support, have said Biden mischaracterized his stance on desegregation busing and downplayed his role in the passage of a 1994 crime bill that exacerbated mass incarceration of black Americans.

After Biden’s lackluster debate performance in June, black and progressive voters will look for him to clarify positions from his 45-year political career and present a clear vision for moving the country forward, strategists and party insiders said.

“An acknowledgement of his history is very, very important,” said Yvette Simpson, chief executive of Democracy for America, a political organization that backs progressive and racially diverse candidates. “I still don’t think he’s owned up to that.”

Booker and Harris could face questions about their own pasts. Harris has been criticized for her civil rights record when she was California’s top prosecutor. In a preview of possible debate fireworks, Biden recently took a swipe at Booker’s civil rights record as mayor of Newark, New Jersey.

But the main focus is likely to be Biden, who has made race a central theme of his campaign.

He has said he entered politics in the early 1970s to fight for civil rights and racial equality, and that he was inspired to launch his 2020 White House bid after a 2017 white supremacist rally in Charlottesville, Virginia, where a woman protester was murdered.

He has faced criticism, however, for touting his ability to work with segregationists when he was a U.S. senator in the 1970s and for invoking George Wallace, the former Alabama governor and segregationist, to denounce Trump.

The latter insult prompted Trump’s re-election campaign to point out that during Biden’s first White House bid in the 1980s, he boasted about receiving an award from Wallace when he campaigned in the U.S. South.

Even so, a Monmouth University poll last week showed Biden with 51% support from likely black primary voters in South Carolina, the state that holds the first nominating contest with a sizeable black electorate. Harris had 12% support, and Booker’s support was negligible.

“We see a Joe Biden today who is evolving over time, and in the words of Jim Clyburn: ‘Thank God a man can grow,’” Seawright said, quoting a prominent black lawmaker in the House of Representatives. “We are seeing Joe Biden grow every single day.”

Biden last week released a sweeping plan to rework the criminal justice system. The proposal would undo much of what was accomplished in the 1994 crime bill he stewarded through the Senate as chairman of its Judiciary Committee.

The 1994 bill was supported by a majority of the members of the Congressional Black Caucus, which cited concerns over violent crime in urban neighborhoods. But it came under fire for mandating harsher sentences for crack versus powder cocaine offenses, which disproportionately sent minorities to prison.

The Obama administration narrowed the crack and powder disparity, clamped down on police departments using unconstitutional policing methods and commuted the sentences of more than 1,700 offenders who were convicted of federal crimes. Biden has touted that record on the campaign trail.

Booker responded to Biden’s latest proposal with skepticism, saying “the proud architect of a failed system is not the right person to fix it.”

Biden hit back by noting that as Newark’s mayor, Booker initially objected to a federal investigation of whether the city police department’s “stop-and-frisk” policy targeted minorities.

The former vice president has also fought back against attacks from Harris, who during last month’s debate told Biden his comments about working with segregationists were “hurtful.”

She went on to confront Biden over his 1970s opposition to mandatory school busing, noting she was bused to school as part of integration efforts in California.

Biden said Harris’ description of his stances were a “mischaracterization across the board.”

Jason Sokol, a historian of the civil rights movement at the University of New Hampshire, said Biden has more explaining to do. While Biden showed “halting support” for using mandatory busing to integrate schools in 1972 during his first Senate campaign, he quickly became “one of the Senate’s leaders in terms of offering anti-busing legislation.”

“Biden had to choose between angry white parents versus racial minority students who were stuck in segregated and underfunded schools, and he choose the white parents and I think that’s important,” Sokol said. “I haven’t heard him say that he was wrong on busing.”

Biden spokesman TJ Ducklo said this week that the former vice president has “always and consistently been supportive of busing where courts order it to remedy illegal segregation, or where communities adopt it voluntarily.” But Biden prefers policies, he said, that “address the root causes of segregation, like rezoning school districts.”