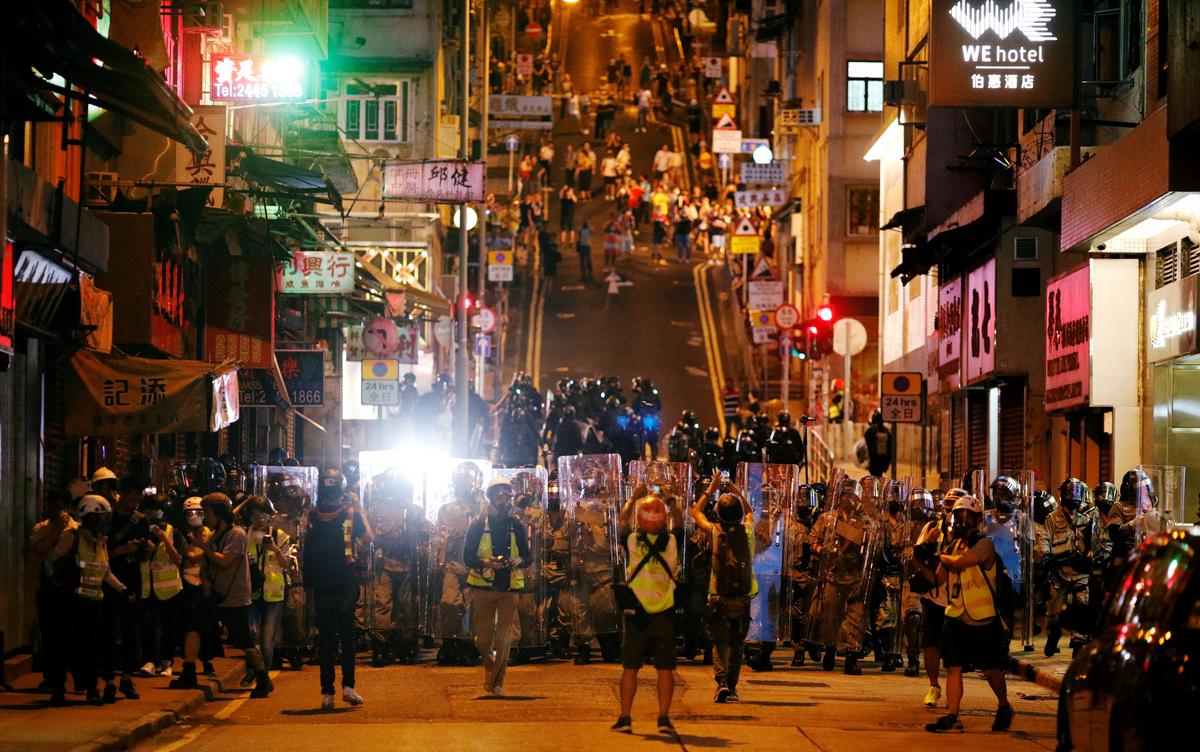 HONG KONG (Reuters) – Hong Kong bore the scars on Monday of another night of violent protests, with hard hats, umbrellas and water bottles littering some central streets, as Beijing was set to make an announcement on the Asian financial center’s worst crisis since 1997.

Police officers line up during a protest against what the activists see as excessive police force against protesters during previous demonstrations, near China’s Liaison Office, Hong Kong, China July 28, 2019. REUTERS/Edgar Su

In a rare move, the Hong Kong and Macau Affairs Office in Beijing, which has cabinet-level authority over the former British colony, is due to hold a news conference at 0700 GMT about the unrest gripping the city.

That follows another weekend of clashes between protesters and police, who again fired rubber bullets and tear gas as the demonstrations grow increasingly violent.

Police sought to defend China’s main representative office in Hong Kong from protesters on Sunday for the second consecutive weekend, with the building near the heart of the city fortified with barricades.

Police said they had arrested at least 49 people over Sunday’s protests for offences including unauthorized assembly and possession of offensive weapons.

Millions have taken part in street protests against a now-suspended extradition bill that would have allowed criminal suspects in Hong Kong to be sent to China to face trial in Communist Party-controlled courts.

The protests, during which hundreds stormed the city’s legislature on July 1, are the most serious political crisis in Hong Kong since it returned to China 22 years ago.

They also pose the greatest popular challenge to Chinese leader Xi Jinping since he came to power in 2012.

Hong Kong returned from British to Chinese rule in 1997 under a “one country, two systems” formula that promised wide-ranging freedoms denied to citizens in mainland China.

Many fear Beijing is increasingly chipping away at those freedoms.

What began as a movement to oppose the extradition law has taken on broader demands. They include the resignation of Hong Kong’s Beijing-backed leader Carrie Lam, calls for full democracy and an independent inquiry into what some say has been excessive force used by police against protesters.

Lam has so far refused to accede to any of the demands.

The protests have at times paralyzed parts of the financial district, shut government offices and disrupted business operations across the city. Officials have also warned about the impact of the unrest on Hong Kong’s economy.

The American Chamber of Commerce in Hong Kong said on Monday that, according to a recent survey, international businesses were pessimistic about the short-term prospects for the city due to escalating violence and political deadlock.

Respondents reported a deepening perception within their companies and among overseas customers that Hong Kong had become less safe and a riskier place in which to conduct business, it said.

“A clear majority of our membership surveyed over the past week said the government needs to address the underlying causes of the protests and not simply to paper over the cracks of social instability with a short-term law and order fix,” AmCham President Tara Joseph said.

A series of protests are planned over coming weeks and the outlook for Hong Kong is increasingly uncertain.

Labour Party lawmaker Fernando Cheung, who has tried to mediate between activists and police, told Reuters Lam needed to heed demands to withdraw the extradition bill and set up an independent commission, among other requests.

“Short of that, we would only be spiraling down towards even more violence, death, a curfew and even PLA interference,” Cheung said, referring to China’s People’s Liberation Army.