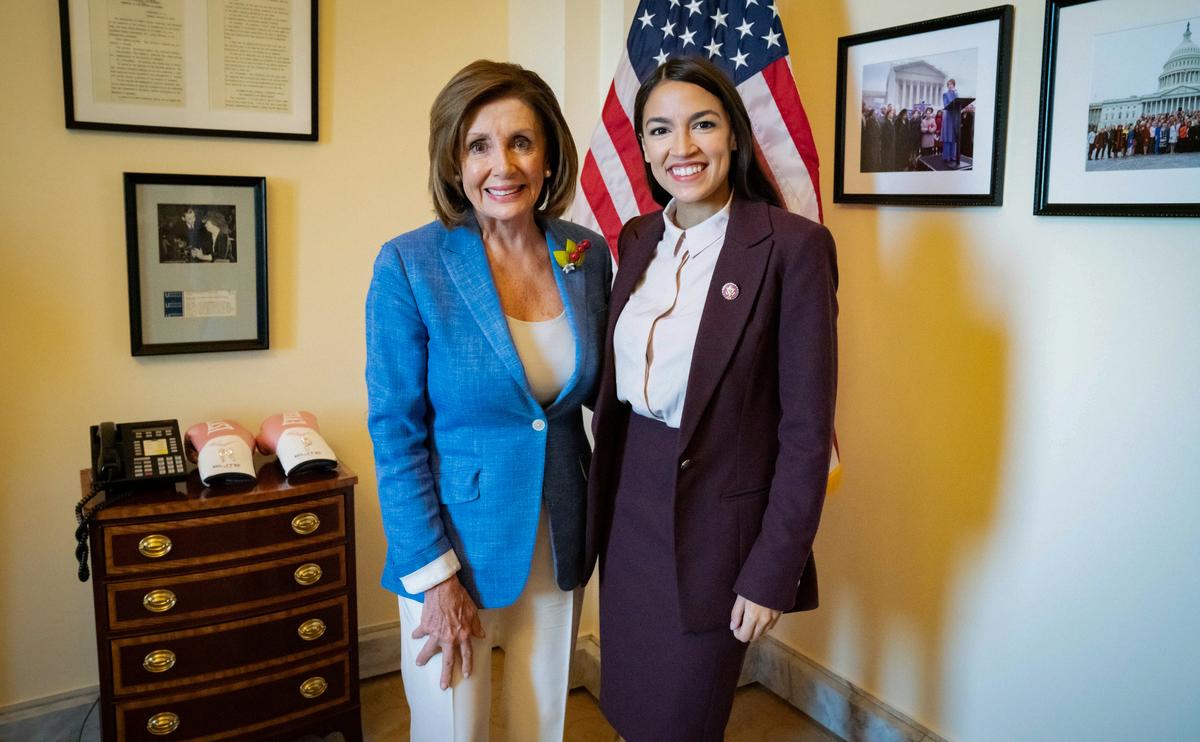 WASHINGTON (Reuters) – U.S. House Speaker Nancy Pelosi said she and Representative Alexandria Ocasio-Cortez had no hatchet to bury on Friday, playing down tensions after a meeting between the powerful speaker and freshman lawmaker who in recent months has seized the Democratic Party spotlight.

U.S. Speaker of the House Nancy Pelosi (D-CA) poses with Rep. Alexandria Ocasio-Cortez (D-NY) in a photo released by her office after they met in the Speaker’s office at the U.S. Capitol in Washington, U.S. July 26, 2019. Office of House Speaker Nancy Pelosi/via REUTERS

In clashes with her own party leaders as well as the White House over border aid and other issues, Ocasio-Cortez and a handful of other left-wing Democratic progressives have become a target for President Donald Trump and his Republicans heading into the 2020 U.S. elections.

The rise of “the squad,” as Ocasio-Cortez’s small group of four minority congresswomen is known, has sometimes appeared to strain Pelosi’s patience as she works to keep House Democrats unified and to restrain demands from many lawmakers to start impeachment proceedings against Trump.

In a news conference on Friday, Pelosi minimized divisions with Ocasio-Cortez and the other three squad members – Ilhan Omar, Rashida Tlaib and Ayanna Pressley.

Asked if she and Ocasio-Cortez had buried the hatchet, Pelosi told reporters, “I don’t think there ever was any hatchet.”

“These, some personality issues and the rest, they are minor,” she said.

“We sat down today. We had a good meeting. And the congresswoman is a very gracious member of Congress, so we had a very positive conversation about our districts and how we represent them, our country.”

Pelosi also said that differences of opinion in the Democratic Party should be respected.

“We are not a lockstep, rubber-stamp representation of anything,” she said, recalling past party brawls over issues such as the Iraq war.

Ocasio-Cortez did not speak to reporters after the meeting and there was no immediate comment from her office.

The Capitol Hill meeting with Pelosi came at the request of the 29-year-old Ocasio-Cortez as Congress departed Washington for a six-week break with an uncertain outlook for Democrats’ legislative agenda and their multiple investigations of Trump.

The speaker, who is 79, declined to list her policy differences with Ocasio-Cortez but others did on Twitter. Among other things they “hold different positions on Medicare for All, free college and cancelling student debt, taking corporate donations, ICE (Immigration and Customs Enforcement) and border issues, impeachment,” wrote Waleed Shahid, communications director for the Justice Democrats, a left-wing group that helped launch Ocasio-Cortez’s political career last year.

Initiating an impeachment proceeding against Trump remains high on the priority list for Democrats such as Ocasio-Cortez while Pelosi has worked to rein in impeachment demands.

At least 90 House of Representatives Democrats as of early this week had said they support starting impeachment investigations against Trump.

Earlier this month Pelosi appeared dismissive of the influence of Ocasio-Cortez and the squad in an interview with the New York Times. Ocasio-Cortez responded by telling the Washington Post that she thought Pelosi had been “disrespectful.”

Trump then attacked the minority lawmakers in tweets that the House of Representatives, under Pelosi’s leadership, afterward voted to condemn as racist.

While Trump’s attack was seen by some as an attempt to divide Democrats, it gave Pelosi a chance to come to the squad’s defense and reset her relationship with the lawmakers as the 2020 congressional and presidential elections approach.

Sarah Matthews, the Trump campaign’s deputy press secretary, on Friday poked fun at the meeting of Pelosi and Ocasio-Cortez, saying, “So nice for the leader of the Democratic party to take time out of her busy schedule to meet with Nancy Pelosi.”