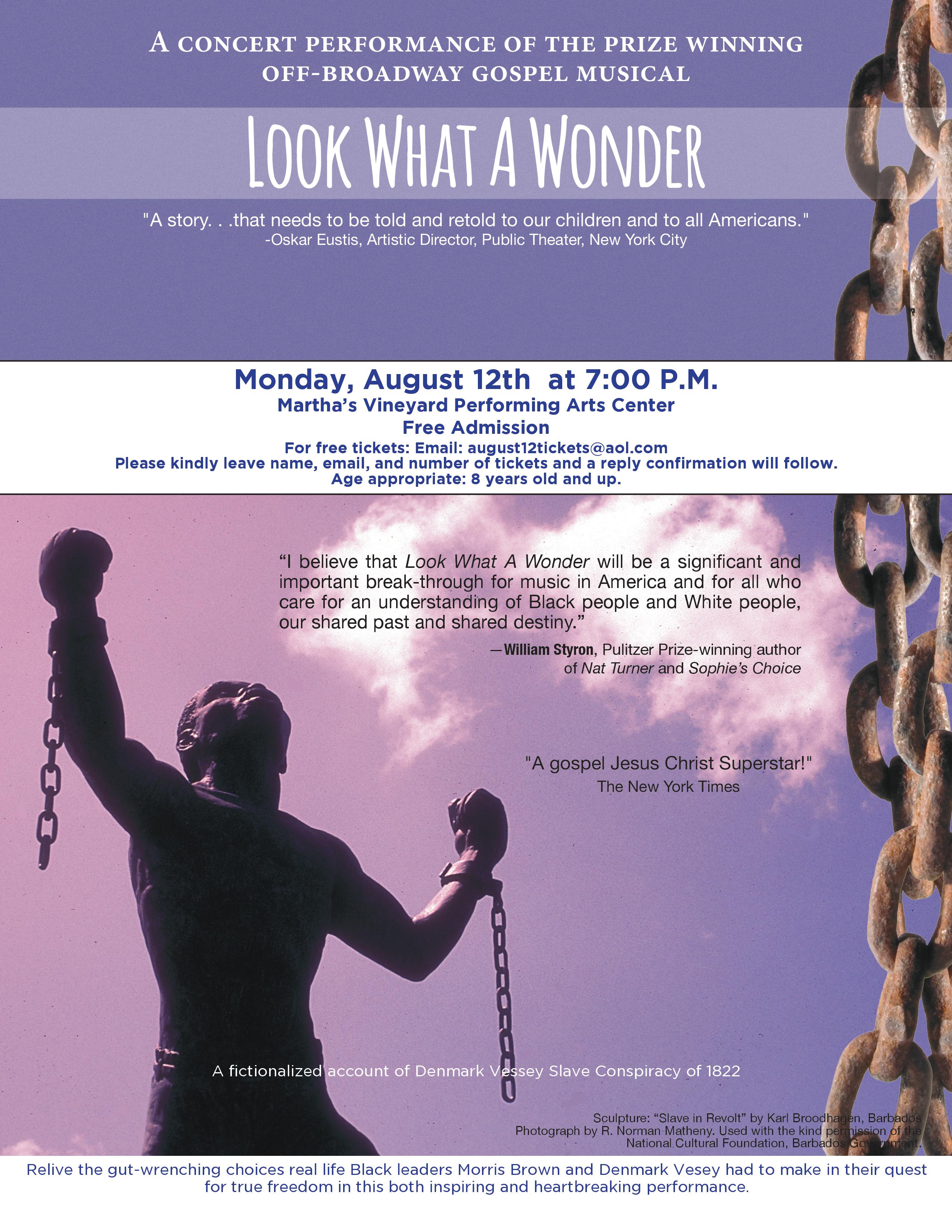 A recent study by The Southern Poverty Law Center reports that the topic of “Slavery in America” has been conspicuously absent in high school curricula going back for over two decades. It states teachers are largely  unprepared and and text books are inadequate to teach this “hard history.”

Thanks to a grant initiated by Darren Walker, the executive director at the Ford Foundation, that vacuum is about to be addressed. The team of Off-Broadway Boston Composer Walter Robinson, history scholars Doug Egerton and David Eltiis, in partnership with Cap Cod archeologist Barry Clifford are converging August 12 at The Martha’s Vineyard Performing Arts Center at 7pm in an innovative cross-disciplinary presentation.

The center piece is Robinson’s prize-winning Off-Broadway gospel musical on the Denmark Vesey Slave Conspiracy of 1822 in Charleston, SC entitled Look What A Wonder. Vesey co-founded Emmanuel AME Church in 1818, the place of the 2015 massacre of nine parishioners during a Bible class by White supremest youth, Dylann Roof.  The date of the massacre was the identical month date of Vesey’s planned rebellion, June 17th.

Robinson researched, wrote the music, lyrics and book to his musical while he was an invited multi-year Fellow at Harvard’s Hutchins Center for Afro American and African Research. At the end of that residency Look What A Wonder was first presented in concert at a Boston Black Jewish Seder at Union United Methodist Church in the Black community, co-hosted by the New England Anti-Defamation League and Harvard University. Later Look What A Wonder was chosen from over 400 international submissions and was given a fully staged Off-Broadway World Premiere in the prestigious New York Music Theater Festival at St. Clements Church on 46th street.

Fast forward to 2019: Robinson will bring talented Broadway leads with the urban community’s most outstanding gospel voices in a narrated concert of the work to the Martha’s Vineyard. Admission is free.

When audience members enter the theater lobby, they will encounter a compelling display of artefacts salvaged by Barry Clifford from the slave ship Whydah wreck off the coast of Wellfleet. Items such as the oldest documented Akan gold jewelry in the world, brass Manila bracelets, slave shackles, a stove used to cook food for the slaves etc. will be available for all to see. The Akan gold and bracelets were items used in the multilayered purchase exchange for African families who then commenced on the Middle Passage.

Doug Egerton, whose exemplary scholarly book on Vesey entitled “He Shall Go Out Free : The Lives of Denmark Vesey” will also be available for perusal and purchase. Egerton’s book includes over 1000 never before published original source documents on the conspiracy and trial which was closed to the public.

Scholar David Eltis will donate the third lobby display. Enabled by state-of-the art digital projection technology, audience members will be able to see representations of over 35,000 slave ship voyages across the Middle Passage between 1500 and 1868 projected on a screen.

The Look What A Wonder performance will be video taped and used in the Newark Public School system to teach “Awareness of Slavery And It’s Present Day Legacy,” touching but not limited to such topics as: ‘Reparations,’ ‘Black on Black Violence,’ ‘The Middle Passage,’ ‘Children and Teens in Slavery,’ ‘Slavery’s Economic Profits In Relationship To The Economic Growth of America,’ (in particular the financial growth of New York City). The Newark teaching sessions are facilitated up by the Newark Mayor’s Office and Newark Arts. The Newark program is first step in a plan to engage youth in other cities and students at Historically Black Colleges.

The New York Times Releases 100 Notable Books for 2022
132 Black Friday Sales You Can Still Shop: Kate Spade, SKIMS & More
How Did Andrew Garfield And Bridgerton’s Phoebe Dynevor Actually Meet?
Rezz lets slip she and deadmau5 are headlining a festival b2b in 2023
“You Are Love” delivers on the sheer physical rush of dance music, as HAMX holds nothing back