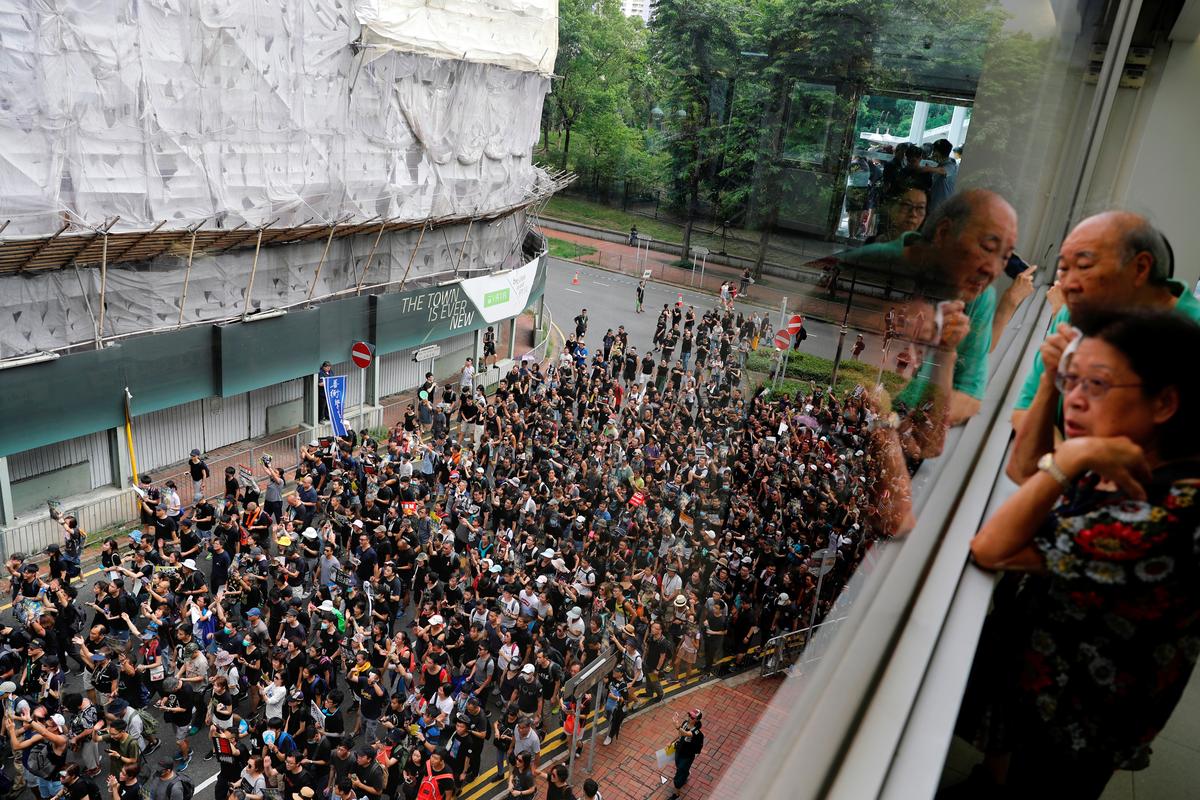 HONG KONG (Reuters) – Tens of thousands rallied in a large Hong Kong suburb on Sunday, driven by abiding anger at the government’s handling of an extradition bill that has revived fears of China tightening its grip over the former British colony and eroding its freedoms.

Millions have taken to the streets over the past month in some of the largest and most violent protests in decades over an extradition bill that would allow people to be sent to mainland China for trial in courts controlled by the Communist Party.

Clashes broke out as protesters hurled umbrellas and plastic bottles at police who retaliated by firing pepper spray amid chaotic scenes inside a shopping mall that houses some of the world’s biggest luxury brands.

Most of the demonstrators dispersed shortly afterward as a small group sang the Christian hymn “Sing Hallelujah to the Lord”, which has emerged as the unlikely anthem of the protests.

Protesters marched in sweltering heat of about 32 degrees Celsius (89.6°F) in Sha Tin, a town between Hong Kong island and the border with China, extending the demonstrations outward from the heart of the financial center into surrounding districts.

“These days there is really no trust of China, and so the protesters come out,” said Jennie Kwan, 73.

“Didn’t they promise 50 years, no change? And yet we’ve all seen the changes. I myself am already 70-something years old. What do I know about politics? But politics comes to you.”

Hong Kong returned to Chinese rule in 1997 under a “one country, two systems” formula that guarantees its people freedoms for 50 years that are not enjoyed in mainland China, including the liberty to protest and an independent judiciary.

Beijing denies interfering in Hong Kong affairs, but many residents worry about what they see as an erosion of those freedoms and a relentless march toward mainland control.

Hong Kong’s embattled leader, Carrie Lam, has said the extradition bill is “dead”, but opponents say they will settle for nothing short of its formal withdrawal.

Some protesters on Sunday waved banners appealing to U.S. President Donald Trump to “Please liberate Hong Kong” and “Defend our Constitution”. Such scenes are certain to rile Beijing, which has been angered by criticism from Washington and London over the controversial bill.

Others waved British and American flags, while banners calling for Hong Kong’s independence billowed in the sultry breeze from makeshift flagpoles.

One placard featured a picture of Chinese leader Xi Jinping with the words: “Extradite to China, disappear forever.”

Chants of “Carrie Lam go to hell!” rang through the crowd, gathered well away from the island heart of the financial center which has witnessed the largest and most violent demonstrations over the past month.

The bill has stirred outrage across broad sections of Hong Kong society amid concerns it would threaten the much-cherished rule of law that underpins the city’s international financial status. Young, elderly and families joined the latest protest.

The protests have caused the former British colony’s biggest political crisis since its handover to China. Demonstrators stormed the Legislative Council building on July 1 and ransacked it.

“I never missed a march so far since June,” said a 69-year-old man who gave only his surname, Chen.

“I support the youngsters, they have done something we haven’t done. There is nothing we can do to help them, but come out and march to show our appreciation and support.”

Protesters are also demanding that Lam step down, the withdrawal of the word “riot” to describe demonstrations, the unconditional release of those arrested and an independent investigation into complaints of police brutality.

Police have condemned what they describe as “violent protesters” and stressed that officers will investigate all illegal acts.

One woman, in her mid-50s, said protesters had harassed her after she tried to defend the police, whom activists described as “dogs”.

“It’s verbal violence,” said the woman, who gave her name only as Catherine. “People just surrounded me and shouted rude language and that makes me feel I am living in fear.”

Mass protests over the bill since June have morphed into demonstrations over democracy and broader grievances in society.

On Saturday, a largely peaceful demonstration in a town close to the Chinese border turned violent as protesters hurled umbrellas and hardhats at police, who retaliated by swinging batons and firing pepper spray.

The government condemned violence during Saturday’s protests against so-called “parallel traders” from the mainland who buy goods in bulk in Hong Kong to carry into China for profit.

It said that during the last 18 months it had arrested 126 mainland visitors suspected of infringing the terms of their stay by engaging in parallel trading, and barred about 5,000 mainland Chinese also suspected of involvement.

Earlier on Sunday, hundreds of journalists joined a silent march to demand better treatment from police at protests.

A police statement said that while there was room for improvement in coordination between officers and the media, the police respected press freedom and the media’s right to report.

White House aide’s astonishing testimony may help January 6th committee resonate with the public
The 50 Best Book Covers of 2021, As Chosen By Graphic Designers
Kyiv targeted by Russia in ‘symbolic’ attack before NATO summit as one killed and several injured in missile strikes
Book Riot’s Deals of the Day for June 26, 2022
Gordon Brown says Britain is ‘at war with America over Ireland’