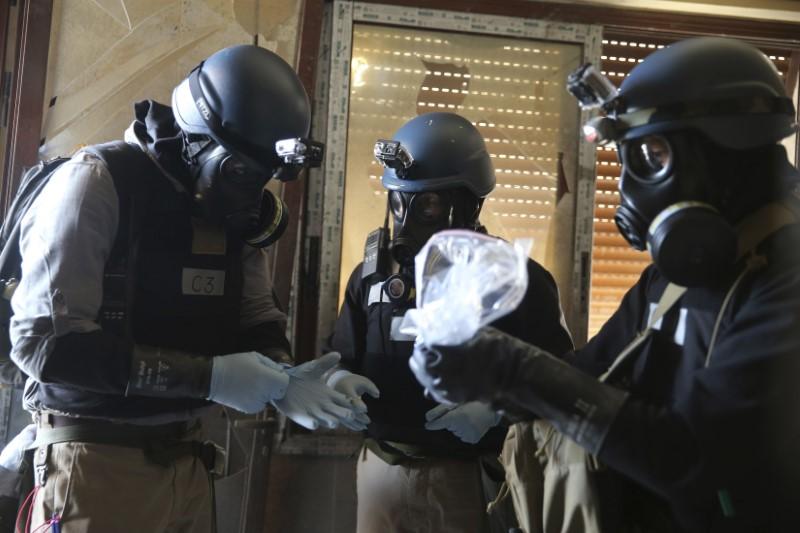 THE HAGUE (Reuters) – A new team established by the global chemical weapons watchdog to attribute blame for the use of banned munitions in Syria will investigate nine alleged attacks during the country’s civil war, including in the town of Douma, sources briefed on the matter told Reuters.

FILE PHOTO: A U.N. chemical weapons expert, wearing a gas mask, holds a plastic bag containing samples from one of the sites of an alleged chemical weapons attack in the Ain Tarma neighbourhood of Damascus August 29, 2013. REUTERS/Mohamed Abdullah

The Organisation for the Prohibition of Chemical Weapons (OPCW) was created in 1997 as a technical body to enforce a global non-proliferation treaty. Until now it had been authorised only to say whether chemical attacks occurred, not who perpetrated them.

Last June, the Investigation and Identification Team (IIT) was established by the OPCW’s member states during a special session, a move that has brought deeper political division to the U.N. -backed agency. Now it has identified the locations of its first investigations to be conducted in the coming three years.

A document circulated to OPCW member states, a copy of which was seen by Reuters, said the team “has identified a non-exhaustive provisional list of incidents on which it intends to focus its investigative work” between 2014 and 2018.

The British-led proposal creating the 10-member team was supported by the United States and European Union, but opposed by Russia, Iran, Syria and their allies.

Syria has refused to issue visas to the team’s members or to provide it with documentation, OPCW chief Fernando Arias said in comments to member states published last month.

There were reports of dozens of fatalities on April 7, 2018, after an attack on Douma, at the time held by rebels but besieged by pro-government forces.

U.S. President Donald Trump blamed the attack on Syrian forces and launched missile strikes on Syrian government targets a week later with the backing of France and Britain.

A Russian representative to the OPCW in The Hague did not respond to requests seeking comment.

Syria joined the Chemical Weapons Convention in 2013, agreeing to open itself up to OPCW inspections and averting threatened military action by then U.S. President Barack Obama.

As part of a deal brokered with Russia, Damascus promised to completely destroy its chemical weapons capabilities, but attacks with banned munitions have been widespread and systematic during the civil war, which began in 2011.

A United Nations-OPCW Joint Investigative Mechanism (JIM) carried out the task of assigning blame for chemical weapons attacks, but Russia vetoed a resolution to extend its mandate beyond November 2017.

The JIM concluded in a series of reports that the Syrian military used both nerve agent sarin and chlorine as weapons, while Islamic State insurgents used sulphur mustard gas on the battlefield.

The new team at the OPCW is focusing on sites of chemical attacks where culprits have not yet been identified by the JIM.

The OPCW concluded in a March 1 report that a chemical weapons attack occurred in Douma, most likely with chlorine. It did not assign blame.

As of this year, Syria had not fully disclosed its chemical weapons programme or explained why inspectors have continued to find traces of prohibited nerve agents or their chemical precursors at multiple locations.

Syria has acknowledged, after more than five years, that it carried out research and development activities on nerve agents it has never admitted having.

“This adds to the growing evidence of deliberately false declarations by Syria, destruction of possible evidence, and the alarming likelihood that Syria continues to possess” banned chemical agents, Canada’s ambassador to the OPCW, Sabine Nolke, told delegates attending meetings at the OPCW in The Hague this week.

“Continued possession of these chemicals by Syria lends additional credence to existing allegations of their use by the regime,” she said.

Number of migrants found dead inside truck in Texas rises
Protests follow US Supreme Court’s move to overturn abortion protection as clinics begin to close
How Chadwick Boseman’s Estate Has Been Settled Following The Actor’s Death
World leaders condemn shopping centre attack in Ukraine, calling it a ‘war crime’
Chris Pratt Speaks Out About Playing Mario, Sounds Like Has Has Big Plans For The Nintendo Character’s Voice